Joshua Ferris’s third novel, To Rise Again at a Decent Hour, drew praise from the judges for its unique humour and impressive ability to distil comedy from human tragedy. The novel was also shortlisted for the 2014 Man Booker Prize in the first year American works were eligible.

Joshua’s first novel, Then We Came to the End, received the PEN/Hemingway Award in 2008, and his work has appeared in Granta, Tin House, and The New Yorker.

In 2017, Joshua put his observant eye and keen wit to work on The Dinner Party, a collection of short stories that takes a deadpan approach to modern masculinity with devastating effect.

Synopsis - 'To Rise Again at a Decent Hour'

Paul O'Rourke is a man made of contradictions: he loves the world, but doesn't know how to live in it. He's a Luddite addicted to his iPhone, a dentist with a nicotine habit, a rabid Red Sox fan devastated by their victories, and an atheist not quite willing to let go of God.

Then someone begins to impersonate Paul online, and he watches in horror as a website, a Facebook page, and a Twitter account are created in his name. What begins as an outrageous violation of his privacy soon becomes something more soul-frightening: the possibility that the online "Paul" might be a better version of the real thing. As Paul's quest to learn why his identity has been stolen deepens, he is forced to confront his troubled past and his uncertain future in a life disturbingly split between the real and the virtual.

At once laugh-out-loud funny about the absurdities of the modern world, and indelibly profound about the eternal questions of the meaning of life, love and truth, To Rise Again at a Decent Hour is a deeply moving and constantly surprising tour de force.

The 2014 Dylan Thomas Prize for young writers, which is sponsored by Swansea University, has been won by Joshua Ferris with 'To Rise Again at a Decent Hour'

Now in its ninth year this  is open to any published author in the English language aged 39 and under.

It celebrates the legacy of Swansea poet and writer Dylan Thomas, and the importance of creativity and literary excellence in the contemporary world. 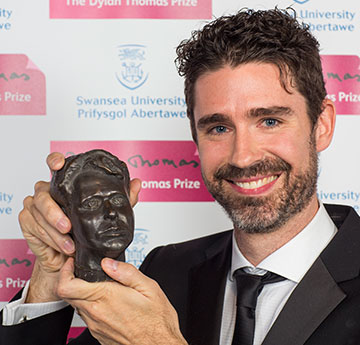 To Rise Again at a Decent Hour, which was also shortlisted for the 2014 Man Booker Prize, is a darkly comic novel about the meaning of life, the certainty of death, and the importance of good oral hygiene.

Joshua Ferris is the author of two previous novels:Then We Came to the End, which was nominated for the National Book Award, won the PEN/Hemingway Award and was longlisted for the Guardian First Book Award, and the highly acclaimed The Unnamed. In 2010 Joshua was selected for The New Yorker's '20 Under 40' list of fiction writers. He lives in New York.

Joshua will receive £30,000 and a limited edition bronze cast of Dylan Thomas.

Peter Stead, Founder and President of the International Dylan Thomas Prize, said: “Joshua Ferris’ book, about a New York dentist faced with the frustration of his job, his sexual relationships and his identity is drawn into a wider world in which he discovers the role of electronic media and mysterious religious cults in shaping not only his life, but also his identity. A novel which encapsulates the frustration, energy and humour that goes into the making of New York.”

Peter Florence, Founder of the Hay Festival and Chair of the judging panel said:   “People who can make comedy from human comedy are rare and wonderful. It’s an incredibly hard thing to do and takes a kind of genius to deliver it on the page.”

Professor John Spurr, Head of the College of Arts and Humanities at Swansea University, which sponsors the prize, said: "Swansea University is deeply proud of our partnership with the Prize.  We have common goals: we aim to nurture talent, to celebrate creativity, and to achieve international excellence.  We want to take the best of Swansea to the world and bring artists, scholars and students from around the globe to South Wales."

The shortlisted internationally-acclaimed writers, who come from a rich mix of background influences: Wales, England, Ireland, Jamaica, the United States, Russia and New Zealand were: