Kayo Chingonyi's debut collection, Kumukanda (Chatto & Windus, 2017) was a Guardian and Telegraph Book of the Year, and the winner of the 2018 International Dylan Thomas Prize and a Somerset Maugham Award.

A former Burgess Fellow at the Centre for New Writing, University of Manchester, and Associate Poet at The Institute of Contemporary Arts, London, Kayo is now Poetry Editor for The White Review, and an Assistant Professor in the Department of English Studies at Durham University.

He has performed his work at festivals and events around the world. A Blood Condition, a new collection of poems, will be published by Chatto & Windus, and his memoir Prodigal, is forthcoming with Picador.

Translating as ‘initiation’, kumukanda is the name given to the rites a young boy from the Luvale tribe must pass through before he is considered a man. The poems of Kayo Chingonyi’s remarkable debut explore this passage: between two worlds, ancestral and contemporary; between the living and the dead; between the gulf of who he is and how he is perceived.

Underpinned by a love of music, language and literature, here is a powerful exploration of race, identity and masculinity, celebrating what it means to be British and not British, all at once.

BAFTA-award winning actor and Swansea University fellow Michael Sheen and Dylan Thomas’ granddaughter Hannah Ellis announced 31-year-old Kayo Chingonyi as the winner of the prestigious award, with a prize sum of £30,000, at a ceremony held at Swansea University.

Kayo was awarded for his critically-acclaimed debut poetry collection, Kumukanda. This bold collection explores black masculinity and rites of passage for young black men in Britain. 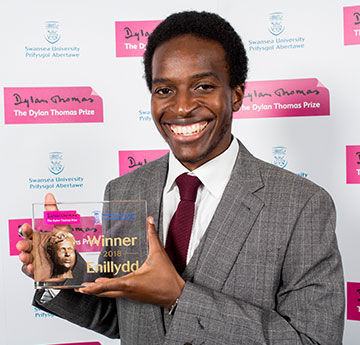 On receiving the award, Kayo Chingonyi said: “I’m staggered. It’s wonderful to receive an award in the name of Dylan Thomas, whose work was introduced to me by a really inspirational teacher by the name of Rachel Baroni who introduced me to Under Milk Wood and I’ve been fascinated by his work since then. I want to take a moment to thank my teachers who gave me the confidence to continue writing the poems I was writing just for myself. It’s through the kind of inspiration of those people in my life that I continue to write and follow it through, and now poetry is the centre of my life, and there’s no sense in which writing couldn’t be a part of life. I’m very grateful".

Awarded for the best literary work published in the English language, written by an author aged 39 or under, the prize celebrates the international world of fiction in all its forms including poetry, novels, short stories and drama.

Chair Dai Smith CBE said: “Kayo Chingonyi has an original and distinctive voice and this collection, mature and moving, shows a young poet mastering form in various ways to reveal content which is both personal and immensely relevant to the social dilemmas of Britain today".

Michael Sheen, BAFTA Award-winning actor and Swansea University Honorary Fellow, said: “I’d like to congratulate Kayo Chingonyi for winning the 10th Swansea University International Dylan Thomas Prize, for his debut collection of poetry Kumukanda, a stunning and hugely culturally relevant collection of poems that keenly explore black culture, masculinity and identity in Britain today. Having grown up near Swansea, I feel a very strong connection with Wales’ cultural heritage, and it is truly an honour for me to present an award that brings the best and most exciting young literary talent from around the world to Wales. I know first-hand how essential exposure to the written word can be for young minds, and I admire the Dylan Thomas Prize for continuing Thomas’ incredible literary legacy and inspiring the next generation of writers and creators from Wales and beyond. With this year marking the 10th anniversary of the prize, as well as the 65th anniversary of Thomas’ death, there is no better time to celebrate Dylan’s legacy and the wonder of the written word".

2018 marks the 10th edition of the Swansea University International Dylan Thomas Prize, named after Wales’ most lauded writer, Swansea-born Dylan Thomas who died sixty-five years ago this year, aged just 39 years old as one of the most important writers of the 20th century. The winner of this year’s prize will receive £30,000, and will be invited to the Hay Festival to discuss their work with Chair of Judges Dai Smith later this month.

Previous winners include Max Porter’s Grief is the Thing with Feathers in 2016, Joshua Ferris’ To Rise Again at a Decent Hour in 2014, and Fiona McFarlane’s highly-acclaimed collection of short stores, The High Places, mostly recently in 2017.