Writer and filmmaker Guy Gunaratne won the Prize in 2019 with his debut novel In Our Mad and Furious City. Set in a London housing estate during city-wide riots, Gunaratne’s compelling multi-voice narrative was praised by judges for allowing the reader to enter ‘lives and circumstances seldom given that centre-stage position in our contemporary culture and society.’

Gunaratne’s novel has been widely acclaimed, winning the Jhalak Prize, and the Authors Club Best First Novel Award, as well as making the longlist and shortlist for other awards, including the Man Booker Prize, and the Goldsmiths Prize.

In 2019, Gunaratne was appointed as a Fellow Commoner in the Creative Arts at Trinity College, Cambridge.

Synopsis - 'In Our Mad and Furious City'

For Selvon, Ardan, and Yusuf, growing up under the towers of Stones Estate, summer means what it does anywhere: football, music, and freedom, but now, after the killing of a British soldier, riots are spreading across the city, and nowhere is safe.

While the fury swirls around them, Selvon and Ardan remain focused on their own obsessions, girls, and grime. Their friend Yusuf is caught up in a different tide, a wave of radicalism surging through his local mosque, threatening to carry his troubled brother, Irfan, with it.

Provocative, raw, poetic yet tender, In Our Mad and Furious City marks the arrival of a major new talent in fiction.

British-Sri-Lankan human rights documentary filmmaker, turned debut novelist, Guy Gunaratne (35), has been announced as the winner of this year’s Swansea University International Dylan Thomas Prize, with a prize sum of £30,000, for his debut novel In Our Mad and Furious City.

In Our Mad and Furious City burst into our consciousness in 2018 providing an urgent, timely and compelling fictional account of 48 hours in an East London housing estate after the murder of a British soldier, as told through three narrators. Risky and inventive, Gunaratne has been lauded for providing an authentic voice to marginalised sectors of society and for shining a spotlight on the very real experiences of youths from minority ethnic backgrounds. 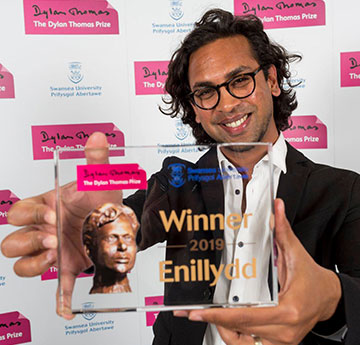 Chair of the judges Professor Dai Smith CBE said, “Once in a while, a work of fiction appears which uses voice, style and story, as only works of the imagination can, to let us enter, to makes us see, to demand we understand lives and circumstances seldom given that centre stage position in our contemporary culture and society. This is what Guy Gunaratne’s stunning multi-voice debut novel In Our Mad and Furious City sets out to do and bravely achieves for marginal lives, young and old, in the unforgiving whirlpool of London today.”

On receiving the award, Guy Gunaratne said: “Dylan Thomas has always meant a lot to me, he’s a writer I’ve always turned to for inspiration. And after winning this prize, my mind really just goes to all the other writers, or aspiring writers, who are writing from a place similar to where I began. A place like Neasden, somewhere I always thought was a nowhere place. But to make art out of the world, the language, the voices I grew up around I always felt was important. That’s all I tried to do with this book.”

Awarded for the best published literary work in the English language, written by an author aged 39 or under, the prize celebrates the international world of fiction in all its forms including poetry, novels, short stories and drama.

The other titles shortlisted for the 2019 Swansea University International Dylan Thomas Prize were: House of Stone by Novuyo Rosa Tshuma, Friday Black by Nana Kwame Adjei-Brenyah, Trinity by Louisa Hall, FOLK by Zoe Gilbert and Melmoth by Sarah Perry.