Native Californian Claire Vaye Watkins’ short story collection, Battleborn, took the Prize in 2013, impressing judges with her ability to create ‘a perfect version of a complete world’ in each of her tales. The collection won many awards, including The Story Prize (2012), and The Rosenthal Family Foundation Award from the American Academy of Arts and Letters (2012).

Claire’s second book – and first novel – Gold Fame Citrus was published in 2015 to broad critical acclaim, and she has had essays and short stories appear in a range of publications, including Granta, The Paris Review, and The New York Times.

Like the work of Cormac McCarthy, Denis Johnson, Richard Ford, and Annie Proulx, Battleborn represents a near-perfect confluence of sensibility and setting, and the introduction of an exceptionally powerful and original literary voice. In each of these ten unforgettable stories, Claire Vaye Watkins writes her way fearlessly into the mythology of the American West, utterly reimagining it. Her characters orbit around the region's vast spaces, winning redemption despite - and often because of - the hardship and violence they endure. The arrival of a foreigner transforms the exchange of eroticism and emotion at a prostitution ranch.

A prospecting hermit discovers the limits of his rugged individualism when he tries to rescue an abused teenager. Decades after she led her best friend into a degrading encounter in a Vegas hotel room, a woman feels the aftershock. Most bravely of all, Watkins takes on – and reinvents – her own troubled legacy in a story that emerges from the mayhem and destruction of Helter Skelter. Arcing from the sweeping and sublime to the minute and personal, from Gold Rush to ghost town to desert to brothel, the collection echoes not only in its title but also in its fierce, undefeated spirit the motto of her home state.

The 2013 Dylan Thomas Prize for young writers, which is sponsored by Swansea University, has been won by Claire Vaye Watkins, with Battleborn, a collection of short stories set in her native Nevada.

Now in its seventh year, the international prize celebrates the legacy of Swansea poet and writer Dylan Thomas.

It celebrates the legacy of Swansea poet and writer Dylan Thomas, who wrote most of his work in his twenties.

Battleborn interrogates the myth of the American West.  The subjects of her tales include a man who finds a cache of letters, pills and a photograph abandoned by the side of the road, and writes to the man he imagines left them behind, only to reveal moving truths about himself. 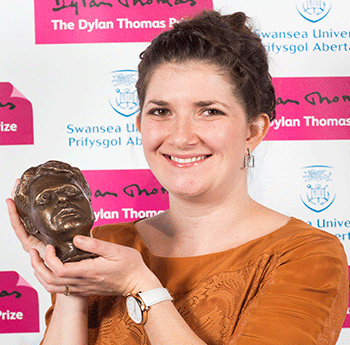 ‌Chair of the judging panel, Peter Florence, said:
“Claire Vaye Watkins has some of Dylan Thomas’s extraordinary skill in the short story form of giving you a perfect vision of a complete world and that’s extraordinarily rare.”

Cerys Matthews, singer and musician and another of the judges, added:
“Battleborn just bubbles. She is such a natural writer. The whole book is so infectious, it leaves you looking forward to what is coming next from this exceptional young author.”

Claire Vaye Watkins said:
"It has been such an honour and a treat and a barrel of laughs to spend time with all the shortlisted authors. Battleborn was written for the Dylans of the world, the people from the so-called backwaters.  It was not written for New York or London.  It was written for people like you and like Dylan".

Claire will receive a cheque for £30,000 and a limited edition bronze cast of Dylan Thomas.

Professor John Spurr, Head of the College of Arts and Humanities at Swansea University, which sponsors the prize, said:
"Swansea University is delighted to sponsor the Dylan Thomas Prize.  Our partnership with the Prize is based on common goals: we aim to identify and nurture talent, to celebrate creativity, and to achieve international excellence. We want to take the best of Swansea to the world and bring artists, scholars and students from around the globe to South Wales. As an ambitious, research-intensive university, Swansea thrives on the creativity of students and staff. We applaud all of the shortlisted writers and will watch their future careers with pride."

Claire Vaye Watkins was born in Bishop, California in 1984.  She is a graduate of the University of Nevada Reno.

Her stories and essays have appeared in Granta, One Story, The Paris Review, Ploughshares, Glimmer Train, Best of the West 2011, New Stories from the Southwest 2013, the New York Times and elsewhere.

The shortlist, which was entirely made up of debut works, was:•    Tim Leach, The Last King of Lydia
•    Marli Roode, Call It Dog
•    Majok Tulba, Beneath the Darkening Sky
•    Claire Vaye Watkins, Battleborn
•    Prajwal Parajuly, The Gurkha's Daughter
•    James Brookes, Sins of the Leopard
•    Jemma King, The Shape of a Forest