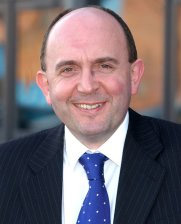 Previously our Acting Head of School Andrew joined us in 2004 as the Director of IP Wales®, our £4m award winning business support initiative. ‌

Originally the Head of Swansea Law School (University of Wales Trinity Saint David) Andrew became the Director of the Swansea Intellectual Property Rights Initiative in 1999. In recognition of its support for Small & Medium Enterprise (SME) use of the IP system the Swansea IPR Initiative became the Winner of the Wales one-2-one Best 4 Business Award in 2000.  Andrew was responsible for designing and launching IP Wales® in 2002. IP Wales® was the recipient of the Judges Special Prize at the WORLDLeaders European Awards in 2004. Under Andrew’s leadership over 800 businesses have been assisted to make informed commercial choices about their IP assets helping them to capture and protect over 220 patents, 70 trade marks and 10 design registrations around the World. Support was furnished to over 25 licensing deals (licensing-in & licensing-out) facilitating the commercial use of intangible assets by integrating an intellectual assets (IAs) strategy within the overall business plan.

In recognition of his success in raising levels of awareness and understanding of IP amongst the SME community in Wales Andrew was seconded from 2008-9 to work for the World Intellectual Property Organization (WIPO). Whilst at WIPO Andrew co-organised and presented at the ‘WIPO Forum on Intellectual Property & SMEs for IP Offices of OECD and EU Enlargement Countries’ (2008) in Cardiff, one of the few occasions this prestigious event has been hosted outside Geneva. Andrew achieved National recognition for ‘services to intellectual property and business in Wales’ with the award of an OBE by the Queen under her Birthday Honours List 2009. International speaking invitations have included presenting to the World Intellectual Property Organisation, the World Trade Organisation, the European Commission and the European Patent Office.