We are grateful to Swansea University for bringing us together

Eiry Miles and David Bryer share their fond memories of their time in Swansea.

Eiry Miles and David Bryer are two of Swansea University’s alumni. Having met during their time at university, they are now married with two children. As we celebrate St Dwynwen's Day in January, the couple share their fond memories of their time in Swansea.

What did you both study at Swansea and what are your jobs now?

Eiry: BA Welsh, 2000 and MPhil Welsh Literature in 2002. After that, I worked in various jobs related to the Welsh language, including being Welsh Language Officer at Swansea University, a Welsh tutor in Patagonia and author of resources for Welsh learners on behalf of the National Center for Learning Welsh. I have also written and adapted several books for children and adults. Since January this year, I am Children's Books Editor for Rily Publications.

Dai: BA American Studies 2001. After graduating, I made sandwiches in the Panini's shop in Swansea for a while before being appointed Development Officer with the Urdd. After that, I worked for many years for Menter Iaith Abertawe (Welsh language initiative) and eventually became the Principal Officer of the Menter. I was then appointed South Wales Regional Director for the Urdd. In 2020, I decided to change direction and completed a teacher training course, and I am now an English teacher at Ysgol Bro Preseli, and I’m really enjoying it.

David and Eiry at University 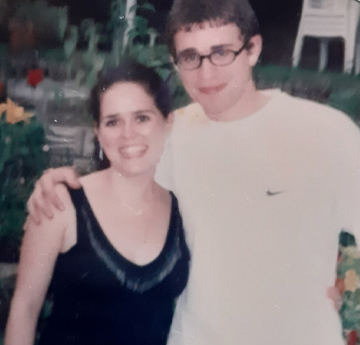 Tell us a little about your experience at Swansea University:

Dai: Being a northerner from Dyffryn Clwyd, I was quite a rarity in Swansea, but I received a warm welcome from the Gym Gym (Welsh Society) crew. It was also nice to meet people from all over the world on campus and to spend an unforgettable year in Mississippi. It was easy to make friends with people from all walks of life because everyone – regardless of their subject of study – had their lectures on Campus.

Eiry: I remember feeling at home immediately in the company of the lively crew of Welsh speakers in the Sibly hall of residence, and we are still good friends today. We had many great evenings with the Gym Gym and I had the privilege of being the (quite chaotic!) Chairman of that society. Another great experience was working as a translator in the Students' Union and getting to know staff and officers from all over the world.

Why did you choose to study at Swansea?

Dai: I wanted to study in Wales and Swansea offered American Studies, which appealed to me very much because of my interest in literature, films and politics. The campus was also a big attraction, because everything is so convenient, and the sea is a stone's throw away.

Eiry: I wanted to study Welsh and wanted to go somewhere new and different. Swansea's Welsh Department had a good reputation, it was far enough from Pontypridd but close enough if you had to go home for some reason. When I went for an interview to the Welsh Department, everyone was extremely friendly, and the Campus made quite an impression on me. I had such a great time on my course and decided to stay in Swansea to do an MPhil after graduating.

How did you meet?

Eiry: We met at the Gym Gym events, and we would also see each other at gigs because we like the same bands (especially Super Furry Animals). We were friends for a few months before becoming more in our second year. Dai spent his third year in Mississippi. It was hard to be without him, especially before the days of What’sApp and Facetime! But I spent the Christmas holidays with Dai in the USA and time went by quickly after that amidst the hustle and bustle of my final year. We married in 2007, and now live in Llanddarog, Carmarthenshire. We have two children, Gwyn (12) and Angharad (10).

Dai: We are grateful to Swansea University for bringing us together and giving us many great experiences and opportunities.