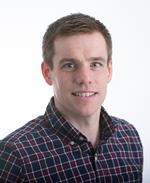 Dr Neil Bezodis is an Associate Professor in Biomechanics & Technology in the School of Sport and Exercise Sciences, and is currently the lead for the Elite and Professional Sport (EPS) Research Group. Neil has been a Fellow of the Higher Education Academy (HEA) since 2012 and an elected director of the International Society of Biomechanics in Sports (ISBS) since 2014. He became a Fellow of ISBS in 2017, and was elected as their Vice President (Awards) in 2019.

Neil is currently the Co-PI (lead for Sports Science) on a Welsh Government funded project being led by EPS and the Welsh Centre for Printing and Coating and working in collaboration with a range of industrial partners including the English Institute of Sport. This project is developing a range of printed smart devices for use across a wide spectrum of applications, including for Olympic athletes in preparation for the 2021 Tokyo Olympics Games.

Neil's broad research interests focus on understanding the biomechanics of sports techniques, with a particular focus on sprint acceleration and Rugby Union. This research comprises a range of techniques including empirical and simulation-based approaches. Throughout his research career, Neil has worked closely with a range of sporting organisations including British Athletics, The English Institute of Sport (EIS), The Rugby Football Union (RFU), Scarlets Rugby and Swim Wales. As part of this research, Neil also collaborates with a range of leading international academics from institutions including Auckland University of Technology (NZ), Fukuoka University (Japan), The National Institute of Fitness and Sports in Kanoya (Japan), The University of Pretoria (SA), The University of Tsukuba (Japan), and Victoria University (Australia).