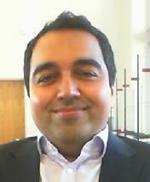 Hari is an Associate Professor in Biomedical Engineering at Swansea University. He did his undergraduate studies 2004-2008 in the Department of Mechanical Engineering at Imperial College London, where he also later completed his PhD titled "Blast loading of fibre reinforced polymer composite structures". He worked in the Mechanics of Materials Section and Soft Solids Group 2011-2013 as a postdoc, completing computational and experimental projects related to impact, nonlinear material behaviour and fracture.

In 2013, he was awarded a Research Fellowship funded by The Royal British Legion and Imperial College London to study Lung Mechanics in the Department of Bioengineering and The Centre for Blast Injury Studies. Here, he developed his research area focused on creating optimised protection strategies against injury, through characterisation of human body biomechanics in trauma.

His current research interests are focussed on lung mechanics. This involves both macro- and micro-scale evaluation of thoracic structural response to blast and impact. The aim of the research is to improve the understanding of underlying failure mechanisms occurring within the lungs to improve both the injury treatment and injury prevention. He is also studying new materials options and materials processing methods for improved energy dissipation in blast environments, which can be tuned to mitigate against a given injury mechanism or combination of mechanisms. At the Zienkiewicz Centre for Computational Engineering, he uses computationally-driven approaches to deliver targeted engineering solutions.