It has been 3 years since we lost Dr Nikaki following a short illness. Those who worked closely with Dr Nikaki and her old students still remember her fondly. The Library of the Institute of International Shipping and Trade Law (IISTL), situated in the Digital Technium Building, has been named after her, and the School of Law has also introduced a prize in her memory for the student who performs best in our Charterparties: Law and Practice module (a module that Dr Nikaki co-ordinated).

This year, the winner of the Prize was Filippos Alexandrakis. Filippos is a graduate of the Law School of Athens (with distinction). He completed his LLM in Maritime Law at Athens (with distinction) and has since completed his LLM in International Commercial and Maritime Law at Swansea University (also with distinction). He has published a book (in Greek) on the topic of “Vetting Clauses in Tanker Chartering”, and in 2020 worked as a research assistant at Swansea University, conducting research as part of a project concerning cyber risks insurance.

Commenting on the success of Filippos, Professor Soyer, the Director of the IISTL, said:

“Filippos has been an exceptional student and made a huge contribution to the student community at Swansea. I could not imagine anyone deserving the Dr Nikaki Prize more than him. I have no doubt that Dr Nikaki would have been very pleased to know that the prize established in her memory had been claimed by a fellow countryman of hers!” 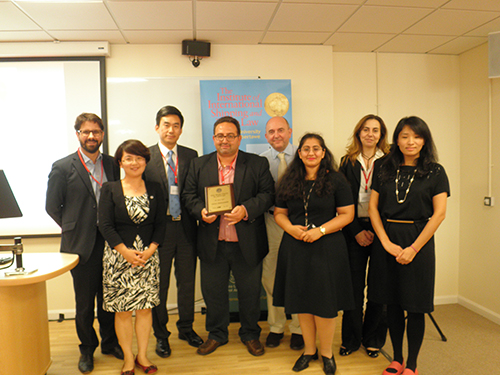 Dr Nikaki with colleagues at a Colloquium held in Swansea in 2014.