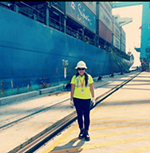 Since graduating from Swansea University, Yaneen works for APM Terminals, an organisation that operates a Global Terminal Network which includes interests in 71 port facilities. The company provides port management and operations to over 60 liner shipping customers who serve the world’s leading importers and exporters of containerised and other cargoes.

As Junior Legal Council, Yaneen analyses and investigates the material damages generated by the Terminal in Lázaro Cárdenas, México, and damages from outsiders to the facilities, equipment and tools.

Yaneen communicates with shipping lines and underwriters for container, cargo and vessel damage claims. She therefore gathers, analyses and processes information on claim procedures, ensuring that all claim reports are received with necessary back-ups such as photographs, SSDR (Ship Stevedore Damage Reports), written statements from those involved and from witnesses, etc. Once all the information is gathered, she uses her independent judgment to analyse, resolve and make a decision on a variety of claim files taking into account important factors such as limitation of liability, the burden of proof and negligence (among others).

Yaneen also coordinates the communication with Port users and Port authorities (local, national) on the field of permitting and licensing. 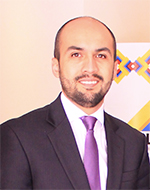 Javier is a partner of FRANCO ABOGADOS ASOCIADOS and is also acting as lecturer of Transport Law, Shipping Law and Logistics at Externado University in Bogotá, Colombia. He obtained his undergraduate law degree from the Externado University (in 2003), his LLM in Maritime Law from the same University and then came to Swansea to study his LLM in International Commercial and Maritime Law, completing the course with distinction.

He is currently Vice-president of the Colombian MLA (ACOLDEMAR) and member of the Colombian branch of the Iberoamerican Institute of Maritime Law (IIDM). He is a member of the International Working Group on Restatement of Lex Maritima of the Comite Maritime International (CMI) and Member of the Standing Young Committee of the CMI. He also acts as an arbitrator of the Bogotá Chamber of Commerce in the fields of commerce and transportation. Javier is also the author of several articles on these subjects, and he published the book “Legal aspects of Logistics and Logistics Contracts” (2014).

Javier is grateful to the experience he had at Swansea and is a proud to be a Swansea LLM Alumni.

Francisco graduated with an International Maritime Law in 2015. Just before his graduation, he joined Holman Fenwick Willan (Sao Paulo offices) as Associate. He specialises in international trade and maritime law, including commercial transactions, insurance and reinsurance and dispute resolution. 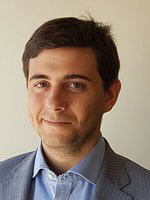 I am the third generation at Pandi Liquidadores SRL, a family business founded almost 50 years ago as P&I Correspondents for Argentina and Paraguay. Throughout the years Pandi has gained a renowned name in the industry, becoming a leading correspondent listed for the vast majority of P&I Clubs within the International Group (IGP&I) and other related underwriters.

After the LLM at Swansea I had the opportunity of gaining work experience with various P&I Clubs and with a Greek-based shipowner, before returning to Pandi.

A P&I Correspondent is frequently the "first call" before a marine-related incident and, therefore, it tends to require proactive, efficient and prompt response under a considerable amount of pressure. As a claims handler at Pandi Liquidadores I have to deal with a wide variety of claims both on wet and dry shipping from the outset of a dispute until its conclusion. I also have to travel to various countries such as the UK, Sweden, Norway and Japan once or twice a year to meet the P&I Clubs we work for to discuss claims and other general matters concerning the shipping industry in Argentina and Paraguay.

Djan Venturim is a Brazilian law graduate who obtained his LLM in International Maritime Law from the University of Wales, Swansea in 2007. After his graduation, he was employed as Claims Handler at the Cargo Department of Charles Taylor Consulting, a world-wide established company engaged in risk assessment, marine casualty surveying and loss prevention advice. While working at Charles Taylor, he was involved in marine claims handling and adjusting for a major oil and petrochemical organisation and deals mainly with claims related to the sea carriage of oil derivate and chemical products. Djan then moved to the Standard P&I Club before returning to Brazil to work as Legal Counsel (specialized in Maritime Law and International Trade) at Companhia Siderúrgica Nacional, where he provided legal advice on legal matters related to maritime and international trade arising out of commodity trade and ship chartering. He is currently working as a Specialist Senior Legal Counsel at Vale S.A.'s Legal Team. He mainly deals with matters related to international contracts, international trade and shipping/maritime disputes.