‘Reflections of a daughter: Kate and Richard Burton’ - Kate Burton

Kate Burton is an actress, director, professor and labour activist. She is best known for her television work on Grey’s Anatomy, Scandal and most recently Inventing Anna, The Dropout and Bosch Legacy. She will soon be seen in Echo Longboard for Apple+ and just wrapped the film, Our Son, both with Luke Evans. She was in the cast of Under Milkwood for Dylan Thomas’ centenary with Matthew Rhys in Los Angeles and with Michael Sheen in New York (live broadcast on BBC Wales). She has appeared on Broadway fifteen times and has been nominated for three Tony awards for Hedda Gabler, The Elephant Man directed by Sean Mathias and The Constant Wife with Lynn Redgrave. On film she has been seen in Big Trouble in Little China, Danny Boyle’s 127 Hours, The Ice Storm, Woody Allen’s Celebrity, Unfaithful, Rescue Me, Where’d You Go, Bernadette? and many others. In the UK she has appeared in the West End in Three Sisters directed by Michael Blakemore with Kristin Scott Thomas and Tobias Menzies, August (a Welsh film adaptation of Uncle Vanya) starring and directed by Anthony Hopkins, the UK/Ireland tour of The Beauty Queen of Leenane directed by Garry Hynes and the CBS miniseries Ellis Island starring opposite her father.

Born in Geneva, Switzerland under the British Consulate, she grew up in New York from the age of four when her parents Sybil Williams (from The Rhondda) and Richard Burton (from Pontrhydyfen) divorced. Receiving her BA from Brown University and MFA in Acting from Yale School of Drama, she is a Professor of Theatre Practice at University of Southern California. Honouring her Welsh Labour roots, she serves on the council of a labour union, Actor’s Equity Association, and was on the steering committee to unite SAG and AFTRA. She is on the boards of Broadway Cares/Equity Fights Aids and is an ambassador for The Elizabeth Taylor Aids Foundation. She lives in NY and LA with her husband, Michael Ritchie, and has two children, Charlotte and Morgan. 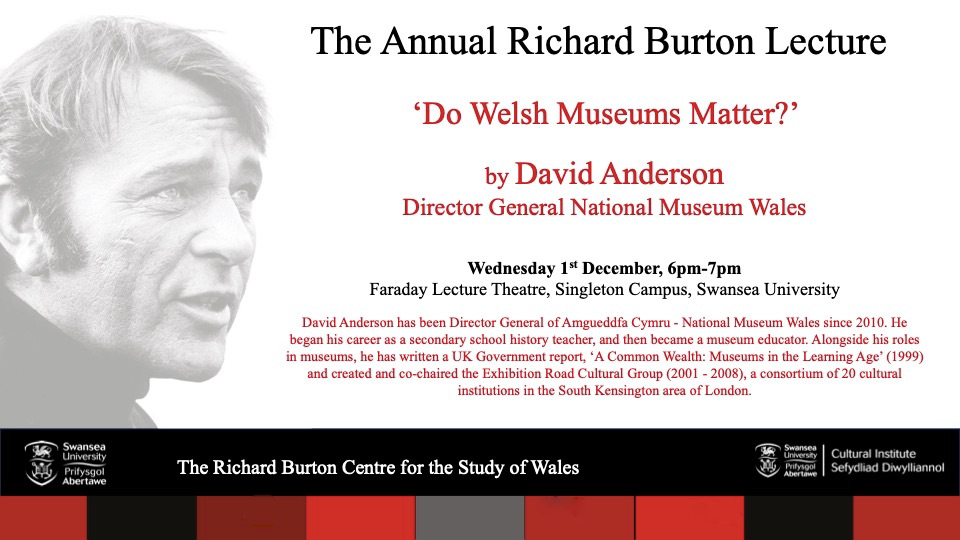 David Anderson has been Director General of Amgueddfa Cymru - National Museum Wales since 2010. He began his career as a secondary school history teacher, and then became a museum educator. Alongside his roles in museums, he has written a UK Government report, ‘A Common Wealth: Museums in the Learning Age’ (1999) and created and co-chaired the Exhibition Road Cultural Group (2001 - 2008), a consortium of 20 cultural institutions in the South Kensington area of London.

Professor Hazel V. Carby read from Imperial Intimacies before discussing her life and career in conversation with Professor Daniel G. Williams, director of the Richard Burton Centre for the Study of Wales at Swansea University.

In her book, Imperial Intimacies: A Tale of Two Islands, Carby moves between the present and past, tracing the intimate entanglements between the twin legacies of her Jamaican father and Welsh mother and placing her own life within the wider history of Empire and the transatlantic slave economy. The volume won the 2020 British Academy Nayef Al-Rodhan Prize for Global Cultural Understanding.

Professor Hazel V. Carby is an eminent cultural critic, pioneer in the fields of black feminism, multiculturalism in Britain and African-American studies. Professor Carby is a co-author of The Empire Strikes Back and author of Cultures in Babylon: Black Britain and African America, Race Men, and Reconstructing Womanhood. Hazel Carby is the Charles C. and Dorothea S. Dilley Professor Emeritus of African American Studies and Professor Emeritus of American Studies Yale University and a Fellow of the Royal Society for the Arts.

Organised by the Richard Burton Centre for the Study of Wales, Cultural Institute, Swansea University.

2019: Rhian Samuel, 'Now I become myself: a woman's voice in music and poetry'

'Now I become myself: a woman's voice in music and poetry'

Welsh composer Rhian Samuel talked about her life as a composer of classical music in the USA and the UK, from a time when women composers were an extreme rarity to today when they are much more prevalent.  In what ways may this change have enriched our culture?  She was aided by Siân Dicker (soprano) and Kristal Tunnicliffe (piano), who performed Cerddi Hynafol (Ancient Songs), settings of three medieval Welsh texts apparently by women, and the song ‘Before Dawn’, set to a poem, ‘Mourning to Do’, by American May Sarton.

Organised by the Richard Burton Centre for the Study of Wales, Cultural Institute, Swansea University.

The Olivier Award winning producer, actor, director and writer, Guy Masterson, explored the notion of the search for a national identity and the inspirations that emerge from it and inform the soul.

On 16 November 2017, the famed Welsh artist and printmaker delivered an illustrated talk that offered an exploration of the creative processes and inspirations that have fuelled a celebrated career spanning six decades and documenting the natural and ever changing industrial landscapes of his native South Wales.

The lecture was also the occasion to mark the welcome arrival at the University of the collection of David Carpanini paintings loaned by Unite the Union. The collection owes its existence to the vision of the late Clive Jenkins, general secretary of ASTMS, a great patron of the arts and a native of Port Talbot. These works of art complement a collection of prints already generously donated by David Carpanini in 2016.

The lecture was delivered at the Great Hall, Bay Campus, Swansea University.  See images from the night on Flickr here.

David Carpanini is one of Wales’ most well-known and respected artists. He was born in the Afan Valley in Glamorgan in 1946 and trained at Gloucestershire College of Art and Design, Cheltenham; the Royal College of Art; and the University of Reading.

Although much of his adult life has been spent in England his paintings, drawings and etchings are almost entirely devoted to the presentation of the valleys and former mining communities of South Wales where he was brought up. Lonely figures, scarred landscapes, perching terraces of houses and ragged roadside sheep are the images to which he is faithful and to which he attributes the development of his creative imagination.

Formerly Professor of Art at the University of Wolverhampton David Carpanini is a member of many prestigious groups and he was the first Welsh President of the Royal Society of Painter-Printmakers (RE). For many years his work has been included in the Royal Academy Summer exhibition and he has exhibited in many group and solo exhibitions in the UK and abroad. He has also undertaken numerous portrait commissions and more recently begun to explore his Italian roots with a series of drawings and etchings of the towns and landscape of north and central Italy. His work has been the subject of several television documentaries and is represented in numerous public; corporate and private collections worldwide.

In early 2014 his work was highlighted in a major retrospective exhibition at the Leamington Spa Art Gallery and Museum, which gathered together some of his most iconic pictures dating back to 1964

“He is a painter and printmaker devoted to the plain complete statement which leaves little to chance and yet, if made with sufficient authority can distil poetry from those ordinary and everyday facts which can go almost unnoticed by most of us.”(Bernard Dunstan RA).

“David Carpanini’s paintings are of his roots. Although solidly representational his pictures speak eloquently of abstracts – fear, isolation, and survival. Those who saw the Channel 4 and HTV Wales programmes about his work will remember these pictures and the gritty energy of the charcoal drawings and etchings. They are set in Wales but the statements he makes are not confined to the Welsh valleys the feelings they evoke are international.” (Robin Stemp).

2016: Matthew Rhys, 'From House of America to The Americans'

Entitled 'From House of America to The Americans', he explored in conversation with Prof Daniel Williams his career from Ed Thomas’s lacerating depiction of post-industrial Wales to his award-nominated role as a Cold War spy, via his portrayal of the Welsh icon Dylan Thomas.

Historian and biographer, Angela V. John, Honorary Professor at Swansea University, gave the annual Richard Burton lecture at Dyffryn Lower School, Port Talbot on 11 November 2015. Marking 90 years since the birth of Richard Burton, the lecture outlined the crucial role of teachers in nurturing the talent of promising young actors from the town.

Professor John focused on Richard Jenkins (Burton) and his contemporaries and Anthony Hopkins. She showed how a few farsighted individuals in schools and in youth centres, who were passionate about drama, helped to transform these young people’s lives and opportunities, laying the basis for a town of stars as well as steel.

The lecture was entitled ‘Educating Richard: Actors and Educators in Port Talbot, 1925-55’ and was preceded, fittingly, by a performance of scenes from "A Midsummer Night's Dream" by Dyffryn pupils.

Professor John drew upon her book "The Actors’ Crucible. Port Talbot and the Making of Burton, Hopkins, Sheen and All the Others" (Parthian, November 2015).

Burton grew up in a world of chapels, opera, eisteddfods, in a town with a vibrant amateur dramatic tradition. He encountered devoted teachers like Philip Burton, with his links to the BBC, and writers and producers like Leo Lloyd and Cyril Jenkins, a railwayman by profession, who in his spare time ran the YMCA theatre company and adapted short stories from Tolstoy.

These were the inspirers behind the stars. It is not simply a case of the isolated genius."

Having innovated in feminist history and in biographical writing, she has here returned to her native area and explores the rich cultural matrix out of which Richard Burton, Anthony Hopkins, Michael Sheen and many others emerged.

Professor John is the perfect person to deliver the 2015 annual lecture, and the topic and location were particularly apt given that Richard Burton received his education at Dyffryn School."

After graduating with her doctorate from Manchester, Professor John lectured for almost thirty years, in Kent then in London. Her first book By The Sweat of Their Brow was a pioneering study of women’s employment at British coalmines. She also wrote an award-winning book for schools called Coalmining Women.

'Wales, America and the Space Race'

‘From Blackwood to Brecon to Port Talbot’s Passion: The National Theatre Wales journey’