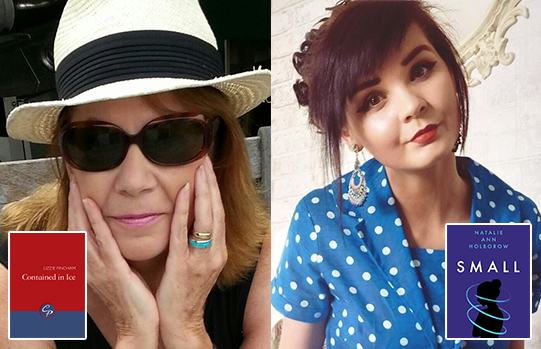 Contained in Ice by Lizzie Fincham
Poignant, elegant and timely, Lizzie Fincham's acute senses and imagistic rhythms give us glimpses beneath the surface of life, to the deeper connections. And always, running through the beauty and the evocation of the natural world, are warnings: 'The woods are turning to smoke'; 'As it always has, the bell tolls'… The delicacy of the poetry belies the magnitude of the themes: the losses and the hope — Contained in Ice contains 'All the small stuff. All the big stuff.'

Small by Natalie Ann Holborow
We all have our favourite demons. Weaved throughout poems on mythology, literary figures and other shores, the narrator is haunted by her biggest demon of all: the gargantuan Small. Told with rawness and honesty, the secretive nature of living with an eating disorder is yanked out into the open and given physical form and voice. Through relationship breakdowns, bath-times, the cacophonous dazzle of Delhi and the fug of hospital waiting rooms, Small is there, slyly riding on the shoulders of a woman running for miles to get away ‒ yet forever haunted by a shadow far larger than her own.

Author Biographies
Gower born poet Lizzie Fincham is currently studying for a PhD in Creative Writing at Swansea University. She has had 80 poems published in various journals and collections including New Welsh Review, Poetry Wales, North, French Literary Review, New Zealand Review. Lizzie has been shortlisted for many prizes, including the prestigious Bridport Poetry Prize on three occasions. In 2017 she was awarded First prize for Brexit Blues in Brighton Poetry Competition. Her first collection Green Figs and Blue Jazz was published by Cinnamon Press in 2017. Her latest pamphlet, Contained in Ice, was published by Cinnamon Press in 2020.

Natalie Ann Holborow is an award-winning writer whose debut collection, And Suddenly You Find Yourself, was launched at the International Kolkata Literary Festival and listed as Wales Arts Review’s ‘Best of 2017’. She is co-editor of the Cheval anthology. Winner of the 2015 Terry Hetherington Award and a recent finalist in the Cursed Murphy Spoken Word competition, her second book Small (Parthian) and collaborative pamphlet with Mari Ellis Dunning The Wrong Side of the Looking Glass (Black Rabbit Press) were both published in 2020. 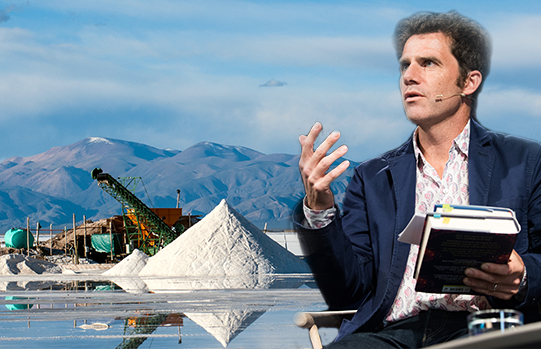 The tale of resource extraction in South America is as an age-old story. Recent decades have seen a new chapter begin to open as the region’s governments seek to recast extractivism as an engine for domestic development. This neo-extractivist turn may well generate macro and microeconomic benefits for host countries but it also comes with high social and environmental costs. The impacts of lithium mining provide an illustrative and timely case in point. Exponential demand for lithium-ion batteries is driving a mining boom in the fragile Atacama region of Chile, Argentina and Bolivia. To secure European supply, moves are now afoot to expand lithium production into Portugal. Through the lens of this rush for “white oil”, this webinar will explore three core questions: what are the costs of neo-extractivism in South America, how are these legitimised, and what (if anything) can be done to resist?

Oliver Balch is an independent journalist, specialising on business’s role in society. Currently based in Portugal, he is a regular contributor to The Guardian, The Times, and the FT, as well as other UK and international media. Oliver completed a PhD at Cambridge University’s Centre of Latin American Studies in 2018, focusing on the role of corporate ethics, foreign investment, and neo-extractivism in Uruguay. Oliver is the author of three travel books, including Viva South America! His latest book project focuses on Amazonia.
www.oliverbalch.com