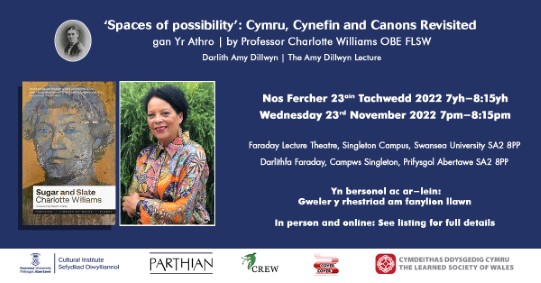 Wales is slowly expanding its literary diet to include more writers of colour and broader literary representations of ethnic diversity. In tandem, the evolution of the Black British literary canon indicates commentators are slowly acknowledging ‘other voices’ and narrative projections from such ‘elsewhere places and spaces’ as they articulate experiences that challenge monolithic ideas about Britishness and assert their significance as expressions of the multifaceted identities. Drawing on examples of work from Wales, I am going to argue for more space and valorisation of what these perspectives bring to the story – in their own terms – more specifically in terms of being ‘of the place’ and yet ‘out of place’ – but also how they speak to both the canon of Welsh writing in English and to opening out of the ‘Black’ and the ‘British’ of the Black British Literary imaginary, ie: my own intervention on the Cymru-Cynefin-Canons debate.

Charlotte Williams OBE FLSW is a Welsh-Guyanese award-winning author, academic and cultural critic. Her writings span academic publications, memoir, short fiction, reviews, essays and commentaries. She has written over fourteen academic books, notably the edited collection A Tolerant Nation? Revisiting Ethnic Diversity in a Devolved Wales (2003 & 2015) and an edited text in the Rodopi postcolonial series on her father’s work Denis Williams: A Life in Works (2010). She is a Professor Emeritus at Bangor University and holds Honorary fellowships at Wrexham Glyndwr University, University of South Wales and Cardiff Metropolitan University. She is a member of the Learned Society of Wales. Her writings have taken her on travels worldwide but her heart and her home are always in Wales.