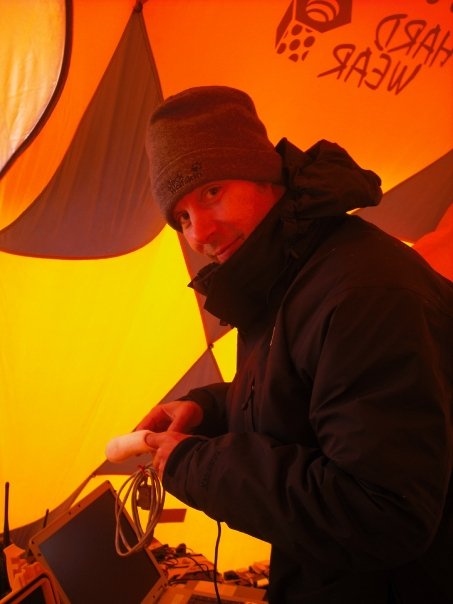 My research focuses on the use of applied geophysics to contribute to our understanding of the response of the world’s ice masses to past, present, and future climatic change, and to address related scientific problems of anthropogenic impact. Cryospheric research interests include:

More broadly peaking I am also very interested in state of the science magnetotelluric imaging of the earth’s crust and upper mantle, and the application of geophysical techniques to assess, characterise and monitor ground hazards and contamination.

My research combines fieldwork, laboratory work, and forward and inverse modelling. Novel developments are sought to integrate geophysical information with other scientific approaches, e.g. through joint inversion or Bayesian modelling, fostered by extensive collaboration with other UK and international institutions.

My earlier research in the European Alps resulted in major discoveries such as the effect of earth tides on glacier hydrology and dynamics by implication. He has been the Principal Investigator or a Co-Investigator on many major grants for research into the dynamics of the Antarctic and Greenland ice sheets. Particularly notable discoveries include the spatial prevalence and hydromechanical diversity of sediments beneath the Greenland Ice Sheet, the seismic imaging of hydrologically-triggered fracture through the ice sheet which then modulates sediments’ strengths and ice sheet flow, and the fundamental control that internal heterogeneities exert on the stability of Antarctic Ice Shelves.

GHOST (Geophysical Habitat of Subglacial Thwaites, 2018-2024) is a US-UK-Germany collaborative project that is part of the joint NSF-NERC funded International Thwaites Glacier Collaboration, and will identify whether basal conditions can facilitate rapid retreat of the Thwaites Glacier grounding line, expand its boundaries and deglaciate adjacent marine basins. The Swansea Glaciology Group will characterise the heat flow from the earth’s upper crust into the base of the glacier using magnetotelluric (MT) geophysical surveys.

IGIS (Impact of Deep Groundwater on Ice Stream Flow in West Antarctica, 2022-2025) is a NERC-funded project led by Swansea Glaciology Group that involves collaboration with the British Antarctic Survey, the University of Cambridge and Imperial College London. The project will identify the role that interactions between crustal groundwater and geothermal heat fluxes and the Institute Ice Stream and Bungenstock Ice Rise play in regulating the stability of the central Weddell Sea Sector of West Antarctica. The project combines computer simulations with in situ seismic and magnetotelluric geophysical surveys as well as satellite remote sensing.

Larsen C Ice Shelf (LCIS): Swansea Glaciology Group has attracted five NERC grants for research into the stability of the Larsen C Ice Shelf (LCIS), Antarctic Peninsula, since 2008, and is currently expanding this research to pan-Antarctic ice shelves. Ice shelves matter because they are first-order controls on the sea level contribution and climate feedbacks from the Antarctic Ice Sheet, providing major physical restraint to the ice streams and glaciers that feed them from the continental interior. When an ice shelf collapses or retreats significantly then that buttressing restraint will decrease and feeder glacier flow speed and thus ice discharge into the ocean and sea level rise increase, and potentially so in the long term. Most notably, following four seasons of fieldwork on the LCIS combined with satellite remote sensing and ice shelf modelling, projects SOLIS (2008-11) and MIDAS (2014-17) asserted that LCIS’s internal structure is highly heterogeneous, and that this complex structure plays a fundamental role in controlling its response to atmospheric and ocean warming in a changing climate. Commencing with project AntShelf2000 (AXA-funded, 2017-18), the Glaciology Group is now striving to identify the pan-Antarctic significance of the many lessons learned at the LCIS since 2008.

‘Outlet glacier and ice shelf dynamics in East Antarctica’ The world’s ice sheet margins are highly dynamic and rapid changes on seasonal or annual time scales are common, although little is currently known about the dynamics of outlet glaciers in East Antarctica, which holds far more sea level potential than West Antarctica and Greenland combined. In collaboration with our Australian and North American colleagues we have initially been elucidating the ice dynamics of the Sørsdal Glacier, a marine-terminating outlet glacier in East Antarctica, and are currently expanding this research to other, much larger, glaciers such as the Denman, Totten and Vanderford Glaciers as well as large ice shelves such as the Amery, West and Shackleton ice shelves. Our in-situ geophysical investigations have so far been focusing on the role of hydrology in forcing the glacier’s flow and meltwater runoff into the Southern Ocean, by delineating the subsurface pathways of water discharge from draining surface lakes, and by identifying whether drainage affects basal lubrication of ice flow. Our current in-situ surveys combine helicopter-borne ground-penetrating radar surveys with passive seismic and electrical geophysical observations. We are now seeking to expand on our work by combining it with satellite observations and numerical modelling to identify the future sensitivity of East Antarctic outlet glaciers to future change.

CRUCIAL: (Discovering the CRUstal structure beneath the Greenland Ice Sheet and its Control of Ice mass loss And sea Level rise): Basal slip is the dominant mechanism by which glaciers and ice-sheets flow, and is a major source of uncertainty in model simulations of mass loss and sea level rise from the Greenland Ice Sheet. Bedrock geology plays a significant role in the speed of ice flow; particularly basins of sedimentary rocks which are a prerequisite for fast ice streaming on the West Antarctic Ice Sheet. Thus far the subglacial geology of Greenland has received relatively little attention and as such we do not yet know whether large sedimentary basins are present.

Seismic methods are the tools of choice in probing the internal structure of the Earth with modern passive methodologies capable of generating 3D images of the subsurface. Additionally, rapid advancements in advanced processing techniques of the background noise of the Earth are allowing unprecedented high-resolution images of the upper crust to be generated. Using passive seismic methodologies, the aim of this project is to quantify the relationship between the Greenland Ice Sheet ice flow velocities and the nature of the subglacial geology