The GDPO Africa Project explores a range of interconnected issues across the continent, with a particular focus on West Africa. The majority of West Africans today live in urban settings and earn their livelihoods in the informal sector. Here the licit shades imperceptibly to the illicit in the trade of an array of commodities including counterfeit goods, falsified medicines or contraband fuel. Within this context, generating better understanding of the dynamics of the illicit trade, and the moral economies that distinguish trading cocaine from, for example small arms or migrants, lies at the heart of the GDPO’s research activities. Trafficking groups are multi-commodity enterprises, deeply reliant on the collusion of state actors with most high value criminal activities initiated and completed outside the region. Combating organised crime and enhancing the human security and stability, therefore, requires a holistic approach with a sharp eye on international connections. To this end, the Project works closely with a network of researchers across West Africa to deepen the understanding of both underlying causes and the impact of policy.

Between Prohibition and Regulation: 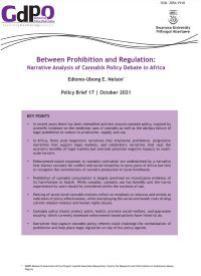 A strong case can be made that cannabis prohibition, institutionalized in the UN narcotics conventions, is a colonial and racist remnant that undermines traditional practices, threaten livelihoods, and widens the reach of the criminal justice system. This is highly evident in Africa, where legal prohibition has often interfered with religious, cultural, and therapeutic uses of the plant, threatened the livelihoods of local communities and increased prison populations through incarceration of young people, mostly for possession of small quantities of cannabis for personal use.

Read the fully policy brief: Between Prohibition and Regulation

An urgent need for closer cooperation and policy exchange 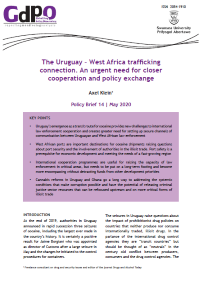 Traditionally, East African countries have followed punitive drug policies and criminalised drug use. For People Who Inject Drugs (PWID) there is limited access to health care services. Many policy makers in this region are yet to understand the shift toward public health approaches; a shift that encourages drug users to access health care to prevent and reduce the risk of HIV infection. The East Africa Community in collaboration with KANCO (Kenya Aids NGO Consortium) is working to develop a regional policy targeting people who use drugs. If approved, the document will act as blueprint for the region in service delivery for people who inject drugs.

The fourth South African National Drug Master Plan (NDMP), for the period covering 2018-2022, was recently released. The plan, developed by the Central Drug Authority (CDA), is intended to ‘outline the contribution and role of various government departments at national and provincial level in fighting the scourge of substance abuse.’ Theoretically the document is mandated to provide South Africa’s national, overarching policy framework with which to inform the country’s response to the use of drugs on all fronts – including the broad strategy for the reduction of the distribution and supply of drugs, as well as the interdepartmental framework for the resolution of substance use disorders and the mitigation of harm related to the use of substances in general…

Recently, the government of Ghana proposed the Narcotics Control Commission Bill of 2017 (NCC) to replace the current Narcotic Drugs (Control, Enforcement, and Sanctions) Law of 1990 (PNDCL 236) that criminalizes all drug-related activities including drug use, possession, trade, and production. NCC aims to decriminalise drug consumption in Ghana. The initiative is a recognition of the grave impact on public health of the country’s current drug legislation, which imposes punitive sanctions on those engaged in the consumption, production, and trafficking. However, the ramifications of legal change could be felt beyond the country as Ghana could become a norm entrepreneur in the region for harm reduction policies....

A new Policy Brief from GDPO analyses the confluence of the European Union’s development policies and external security initiatives in West Africa.  Development objectives have taken a backseat to law enforcement, and many programmes suffer from a lack of distinction between fighting multiple forms of organised crime and combating drug trafficking.  To rectify the situation, law enforcement agencies cooperating with West African partners should draw on the experience of the development sector.  The European Commission should improve oversight and undertake a broader contextual analysis of drug markets and criminal activities in beneficiary countries to ensure that projects designed to promote development, good governance and the rule of law are sensitive to the impact and potentially counterproductive effect on organised crime and the drug trade in different West African theatres.

With the UK likely soon to follow other European countries in introducing a ban on khat, a currently legal mild stimulant used by some African communities within this country, this policy brief examines how previous prohibitionist responses have failed to influence the market as intended. As is discussed, not only have khat bans resulted in the criminalization and stigmatization of users that they are intended to help, they have also led to the creation of illicit black markets. Moreover, criminalization of khat in key Northern European markets represents a major economic blow to rural producer communities in East Africa and the Middle East that are dependent for their livelihoods on the export of khat.  Since expert views on the topic have been sidelined during discussions and the Home Secretary determined to push forward with the ban, a novel constitutional mechanism has been used to articulate concern at the pending criminalisation of khat. In the House of Lords, a Motion of Regret will be read in the first week of May.  It will echo the position of the World Health Organization and other expert bodies that the risk of individual heath and social harms are too small to justify criminalising the substance.

Cannabis and the Drug Law in Tunisia: A Reform Rooted in Social Justice Claims

Drug control policies in Tunisia are guided by the 1992 Narcotics Act (Act 92-52), adopted under the dictatorship following the 1987 Coup d’Etat. Until April 2017, the Act was one of the most punitive drug control laws in the world, sentencing people convicted of drug use or possession of small amounts to a mandatory minimum of one year in prison, and a monetary fine of 1000 Tunisian Dinars (400 USD). The specificity of this law has been the mandatory nature of its sentences, and the incapacity of judges to take into account mitigating circumstances, making it the only law in the Tunisian criminal code depriving judges of their discretion. This specific legal provision, as dictated by article 12 of the Act, was amended by the Tunisian Parliament in April 2017 to address prison overcrowding...

Read the full analysis here: Cannabis and the Drug Law in Tunisia A Reform Rooted in Social Justice Claims

Telling the story of drugs in West Africa: A New Front in a Losing War?

The emergence of significant drug trafficking routes in West Africa, particularly of cocaine from Latin America to European markets, has drawn a great deal of attention from global drug authorities, including the UN Office on Drugs and Crime (UNODC) and the government of the United States, which sees West Africa as a setting for replicating drug-control interventions used in Latin America. West Africa undoubtedly has  significant drug-related problems that merit an energetic response, but this paper questions whether the hyped-up narrative that has been constructed of a lethal problem is meant to justify placement of military, surveillance and anti-terrorism hardware and software in the region at a time when Latin American countries are saying they have had enough of the US-led ‘war on drugs’ in their territories. The response to illicit drugs in West Africa should benefit from a careful reflection about what has and has not worked in other parts of the world.

Virginia Comolli on the drugs and terror nexus