The GDPO Working Paper Series offers an opportunity to view ongoing research for review and comment before it is published.  As such, all papers in the series should be considered as draft papers which may form the basis of future publications.  If you wish to interact with a paper's author with specific comments, then please Email the author directly to open a dialogue in the first instance. 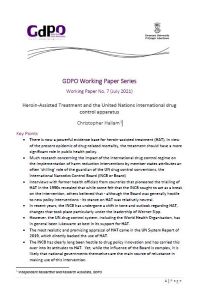 Despite recent increases in Russian and Chinese markets and vendors, much analysis of Drug Cryptomarket (DCM) policy and enforcement operations has been largely focused on English language markets either located in, or serving, buyers in North West Europe, North America, and Australasia. However, the Republic of Korea (ROK) has been quietly developing – in conjunction with domestic academic and corporate partners – highly sophisticated counter-crypto capabilities. By March 2020, ROK technologies were so advanced that Seoul-based S2W Lab were invited to enter a technology-for-data partnership with Interpol. The year-long arrangement formalised mass data sharing between the ostensibly private organisation and international law enforcement. How – and why – the Republic of Korea has moved so far forward in counter-crypto enforcement capabilities is worthy of attention.

CRIME, DRUGS, AND POWER IN HONDURAS: SEARCHING FOR BETTER MEASURES OF STATE FRAGILITY

This report argues that state ‘fragility’ metrics are inadequate. An increase in transparency and a call for new metrics are necessary to address entrenched elite corruption and organised crime in Honduras. In order to achieve these goals, donor countries must reconcile the political cost of promoting policies that address impunity and political protection against their own foreign policy agendas....

The fourth South African National Drug Master Plan (NDMP), for the period covering 2018-2022, will be released in 2018. The plan, developed by the Central Drug Authority (CDA), is intended to ‘outline the contribution and role of various government departments at national and provincial level in fighting the scourge of substance abuse.’ Theoretically the document is mandated to provide South Africa’s national, overarching policy framework with which to inform the country’s response to the use of drugs on all fronts – including the broad strategy for the reduction of the distribution and supply of drugs, as well as the interdepartmental framework for the resolution of substance use disorders and the mitigation of harm related to the use of substances in general.

While these sentiments are laudable and in line with international best practice at the most general level, read in the context of the pragmatic realities of governance in South Africa, it seems however that the CDA and indeed the NDMP have been unduly influenced by both international and local political and moral agendas, the result of which is that both the integrity of the process and outcome have been compromised.

Almost two years after the United Nations General Assembly Special Session on the World Drug Problem (UNGASS), the implications of the resultant Outcome Document remain unclear, and complex.   At a structural level, it can legitimately be regarded as a homeostatic text that does much to help prop up the increasingly creaky UN international drug control framework.  Yet, as member states move to operationalize its key provisions, it is becoming increasingly obvious that the Document has in fact generated considerable concern among what might be called status quo countries seeking to preserve the treaty system in its current form.

THE MODERNIZATION OF TREATY REGIMES: THE CONTRASTING CASES OF INTERNATIONAL DRUG CONTROL AND ENVIRONMENTAL REGULATION

Effective international regimes are not static constructs. While there remains definitional variation concerning exactly what constitutes a regime – a situation that exists not only across but also within the increasingly synergistic disciplines of International Relations (IR) and International Law (IL)1 - there is general agreement that they operate in terms of ‘lifecycles’ and consequently ‘tend to change more or less profoundly during their lifetime.’ Still an area of relatively limited study, the concept of regime evolution takes on increasing salience in light of a significant expansion in the number of international legal instruments in operation today. As the International Law Commission noted in 2006, ‘the volume of multilateral - “legislative” – treaty activity has grown manifold in the past fifty years.’ Furthermore, observe Simmons and Steinberg, such expansion has been accompanied by an increase in ‘the scope of topics and subjects addressed by treaty law,’ with treaty growth being ‘especially marked in economic affairs, as well as in the areas of human welfare and the environment.’

Although various processes of regime evolution can be found across all three categories, this paper focuses on examples from the fields of human welfare (broadly defined) and the environment; more specifically the treaty regime based upon the United Nations (UN) drug control conventions and the regime of environmental regulation and its underpinning Multilateral Environmental Agreements (MEAs). With a basis in comparative analysis, our aim here is to explore how these multilateral treaty based regimes have altered and are capable of modernization over time in response to changes in circumstances and requirements of regime members. Moreover, within the context of shifts in the way that a growing number of jurisdictions are choosing to deal with the illicit use of cannabis within their territories, the paper seeks to demonstrate the extent to which the evolutionary capacity of what has been usefully called the ‘global drug prohibition regime’ (GDPR), can be considered out of step with a more dynamic regime like that dealing with transnational environmental concerns. In so doing, we hope to help move current discussions concerning the tensions presently surrounding the operation of the GDPR beyond the narrow confines of drug policy analysis and locate them within the broader context of IL, IR and wider investigation of regime evolution and modernization in general.

How can the outcomes of international drug control policy be measured? Currently, the UN drug control system lacks appropriate metrics to do so. However, the adoption of the Sustainable Development Goals (SDGs) offers a chance to find new – and potentially better – answers to this question.

In April 2016, the UN held a General Assembly Special Session (UNGASS) on the World Drug Problem. During this high-level conference, member states to the UN adopted an Outcome Document which, like previous soft law instruments on the issue, restated that the current approach of the international drug control system remains largely successful and appropriate to the task at hand.  This was the case even though the system is yet to achieve its core goal set nearly sixty years ago: to, in general terms, significantly reduce drug-related problems and associated harms. Indeed, the Document was adopted in New York despite the fact that there is little evidence that the current approach to international drug control – a combination of measures aimed at reducing simultaneously the supply of and demand for what are commonly known as illicit drugs – has led to any substantive or lasting reduction in drug-related harm…

THE 2016 UNITED NATIONS GENERAL ASSEMBLY SPECIAL SESSION ON THE WORLD DRUG PROBLEM: AN OPPORTUNITY TO MOVE TOWARDS METRICS THAT MEASURE OUTCOMES THAT REALLY MATTER

In recent years, we have seen the emergence of an increasingly honest and sophisticated discourse surrounding the measurement of illicit drug markets.  With this has come a growing acceptance among some governments and international organisations of the concept of uncertainty; an inherent characteristic of our understanding of any illegal market.  At the UN level, for example, this is reflected in the use of data ranges rather than specific point figures for drug use prevalence and associated variables within the United Nations Office on Drugs and Crime’s (UNODC) flagship annual publication, the World Drug Report (WDR). The WDR also now openly contains the admission that there are enormous data gaps in certain regions, particularly in Asia and Africa. Both of these parts of the world possess expanding populations and accelerating rates of urbanization, phenomena associated with increasing levels of the illicit use of a range of psychoactive substances.  As such, although sometimes relying on extrapolation and expert opinion for some sense of ‘ground truth’, out-of-date and incomplete figures are omitted from some regional and sub-regional assessments of prevalence rates.  The result is a more candid, if still inherently problematic, attempt to offer an overview of aspects of a complex and increasingly fluid illicit market...