Keil’s novel Flirting At The Funeral is set against a background of global crisis and is haunted by memories of revolution and terror. Preece’s study Baader Meinhof And The Novel explores forty years of myths and conspiracy theories about the German Autumn. They talk to Gwen Davies, editor of New Welsh Review.

National Theatre audiences for a new production of “From Morning to Midnight” will benefit from the expertise of Swansea University Professor of German Julian Preece, who was asked to write the introduction to the play in the programme.

The Centre was delighted to welcome Dr Cristian Cercel in October 2013 as Research Associate funded by the Modern Humanities Research Association to work with Professor Preece on his introduction to Günter Grass’s short Unkenrufe / Calls of the Toad. Published in 1992, this was Grass’s first work of fiction to tackle the great issue of German unification. It engages in a comic and satirical way with the consequences of this upheaval for the relations between Germany and Poland. Dr Cercel studied for his BA at Bucharest University, moving to the Central European University, Budapest for an MA in Nationalism Studies before writing a PhD at the University of Durham on the topic Philo-Germanism without Germans. Memory, Identity and Representations of the German Minority in post-1989 Romania (2012).

Cult Berlin underground poet Peter Wawerzinek is about to arrive in Wales to read from his fictitious memoir of his life with his favourite fellow poet, Swansea's own Dylan Thomas.

Part absurd fantasy, part comic harangue, Ichdylanich recounts Peter's experiences in and around Wales on the trail of Dylan in 2010.  Born the year after Dylan died, sharing his passion for the amber liquid but brought up in orphanages on the coast of the Baltic Sea, Peter is sometimes convinced that Dylan is the father that he never knew. Ichdylanich is also a declaration of love for the people and places which inspired Untermilchwald. In Wales once again und travelling entirely under his own steam, Peter is launching his new book in Swansea and Laugharne.

Bio: Peter Wawerzinek belonged to the underground scene in East Berlin's Prenzlauer Berg in the 1980s. His nickname was Moppel Schappik, which was also the title of his first surrealist novel on the life of a picaresque hero in the Capital of the dying Workers' and Peasants' Republic. In 2010 Peter finally became famous when he won the Ingeborg Bachmann Prize for the autobiographical Rabenliebe. In 2014 Schluckspecht, on the subject of his struggle with alcoholism, was greeted with more rave reviews.

There will be three performances:

23 January at 7.30pm: 5 Cwmdonkin Drive, Swansea (the Dylan Thomas House), N.B. there is an entrance fee of £5 which includes refreshments.  Click here for more information. 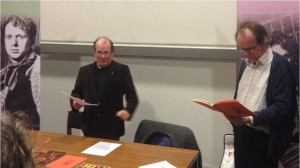 Author Peter Wawerzinek launched his new book Ichdylanich / IdylanI at a bilingual reading on 24 January 2015 in the Centre for Contemporary German Culture. He is seen here with Professor Julian Preece. Both the German original and the English translation by Mitch Cohen are available from the Corvinus Press, Berlin, with linocuts by the late Schoko Casana Rosso.