The novelist, poet, artist and political activist Günter Grass (1927-2015) has been the focus of a number of publication and editorial projects, public-facing events and conferences, as well as post-doctoral and postgraduate work in the CCGC.

We are pleased that the Modern Humanities Research Association is once again in 2019-20 supporting the preparation of a volume of the complete works through its Research Associate scheme. The volume in question is Grass’s major novel of reunification Ein weites Feld (1995, translated by Krishna Winston as Too far Afield) which is being edited by Dr Susanna Brogi, who is attached to the University of Erlangen and is currently the director of the Deutsche Kunstarchiv am Germanischen Nationalmuseum (The Art Archive at the National German Museum). 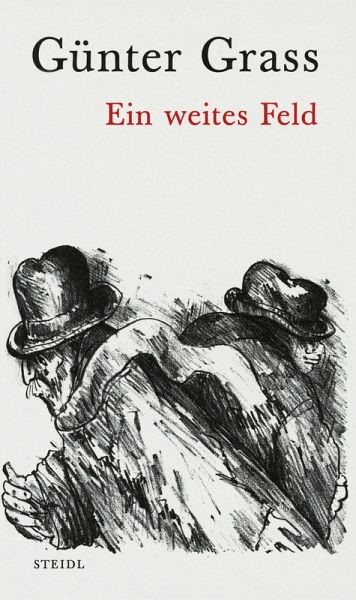 Calls for a novel of the ‘Wende’ which would give literary shape to the epochal changes inaugurated by the Fall of the Berlin Wall in November 1989 began to ring out in the literary sections of the German press before the Wall itself was demolished. Who, some commentators asked, should write this novel if not Günter Grass, whose epic fictions demonstrated such a profound knowledge of the sweep of twentieth-century history? Die Blechtrommel still counted as the most significant literary reaction to the horrors of National Socialism. The novel took account moreover of National Socialism’s profound consequences for society, culture, and art and did so with such a distinctive and original voice. Grass had enjoyed contact with writer colleagues in the GDR since the Wall was built in 1961 and was well-known too for his critiques of unregulated capitalism. He seemed ideally qualified to write a literary account of recent events which would help readers in both East and West Germany understand both their own role in them and the events themselves. Meeting all these expectations proved an impossible task and on publication of Ein weites Feld in 1995, the all-but unprecedented reactions in the media, which have been the subject of book-length studies, suggested that the resulting novel satisfied nobody. Thirty years after the depicted events, however, during which the novel’s literary reputation has steadily grown, a more differentiated assessment has become possible and the purpose of this volume is to assist serious readers and students in making up their own minds about it. The novel deals with the life and works of Theodor Fontane (1819-98), as well as with the history of the secret police in Germany and in particular with the apparatus of oppression in the GDR. It engages with the Second World War and its multiple legacies, relations between Germany and two of its most important neighbours, France and Britain, as well as with architecture and urban planning in Berlin.

In 2014-15 Dr Cristian Cercel was an MHRA Research Associate attached to the edition of Unkenrufe (The Call of the Toad). Both volumes are now due to appear in the autumn of 2020 with Steidl, Göttingen to accompany a new complete edition of Grass’s works.

Research Initiative, the Research Institute of the Arts and Humanities, Swansea

Return of the Picaresque

We are publishing the papers from the conference in a special issue of German Life and Letters, edited by Julian Preece and Nicole Thesz (Miami) in August 2019.

Günter Grass (1927–2015) was Germany’s foremost writer for more than half a century, and his books were and remain best-sellers across the world.  The Tin Drum was made into an Oscar-winning film in 1979 and the memoir Peeling the Onion in 2006 astounded readers by revealing that Grass had been drafted into the most criminal component of the Nazi war machine, the Waffen ss, in the closing months of the Second World War. He also wrote memorably about the student movement, feminism and German reunification, and was a key influence on magic realist authors such as Gabriel García Márquez and Salman Rushdie, as well as the popular novelist John Irving. Grass redefined the role of ‘literary commitment’, campaigning as a citizen for the German Social Democrats and helping the anti-Nazi Willy Brandt become Chancellor in 1969.

Written by Julian Preece, Günter Grass is the first biographical study in English of this Nobel Prize-winning writer.  Grass’s key works are introduced, and the book chronicles his interaction with major figures from literary and public life, including Chancellor Helmut Kohl, critic Marcel Reich-Ranicki, the poet Paul Celan and co-founder of the Red Army Faction Ulrike Meinhof,  placing his fiction and public campaigning in the context of Cold War European politics and post-unification Germany.

"Julian Preece offers an incisive survey of Nobel Laureate Günter Grass’s long career as well as new perspectives on his major works, from The Tin Drum to the complex word-fest of Grimms' Words. Preece broadens our view of the multi-faceted artist, writer, and engaged citizen by means of innovative discussions of the aesthetic influences and political events that shaped Grass’s oeuvre."

Julian Preece is Professor of German Studies at Swansea University. His other books include The Life and Work of Günter Grass: Literature, History, Politics (2nd edn, 2004) and Baader-Meinhof and the Novel: Narratives of the Nation, Fantasies of the Revolution (2012).

The book will be published on 12 February 2018 by Reaktion Books Limited.  For further information click here.