The Latest News From Our Sustainability Team

Find out about what our Sustainability team have been getting up to.

Click on the links below to expand the news article.

Our Sustainability team has partnered up with Plastic Free Swansea and Swansea University Students’ Union to bring the Refill Revolution to Swansea.

Refill Swansea, which will launch on 24-25 November at the Waterfront Museum during the Green Fayre, is part of City to Sea’s award-winning national campaign Refill which is being rolled out across Wales with full support of Welsh Government and water companies Dŵr Cymru and Hafren Dyfrdwy. Hannah Blythyn, Environment Minister says:

"More Refill Stations along our coast will help reduce the number of plastic bottles ending up in the sea, which can have a devastating effect on our marine environment. This is another step towards my ambition of Wales becoming the World's first 'Refill Nation'.”

The Problem With Plastic

According to the Marine Conservation Society, the average adult buys more than three plastic water bottles every week - a startling 175 bottles every year per person. In total, some 7.7 billion plastic bottles are bought across the UK each year, resulting in substantial amounts of single-use plastic waste ending up in our oceans.  As well as helping to tackle this growing issue of single-use plastic pollution, Refill will also substantially increase the availability of high quality drinking water.

The grass roots scheme will encourage people to ditch pointless plastic and make carrying a reusable bottle the norm by providing convenient Refill Stations in venues across the city, including Swansea University’s campuses. A handy Refill app provides the location of all the local Refill Stations.

Local businesses, including cafés, bars, restaurants, banks, galleries, museums and others can get involved with Refill Swansea by signing up and becoming a Refill Station for the community. All they have to do is download the free Refill App, press and hold on the map screen and enter their business details along with a photo. By placing the Refill campaign free tap water sticker in their windows, businesses can demonstrate their commitment to reducing pointless plastic and let passers-by know they’re very welcome to pop in and fill up.

In the week leading up to the Refill Swansea launch, Swansea University will be running on campus events and activities including a series of lectures to promote the scheme to its students, staff and visitors. Keep an eye out for more information on these in due course.

Our Sustainability and Wellbeing Officer and Refill Local Champion Teifion Maddocks explained why both businesses and their customers should get involved with Refill Swansea:

“Plastics, including single-use plastic bottles, are now the most frequently found type of litter on UK beaches and you don’t have to look far to find them littering our towns and green spaces too. Refill Swansea gives the local and business community the opportunity to help make this type of litter a thing of the past here in our beautiful beachfront city.

“For organisations, joining the scheme makes good business sense too as customers view businesses that provide free water refills more favourably and are more likely to return to them to make future purchases.

“Swansea University is a leading sustainable university and we’re delighted to be able to support Refill with our partners in Plastic Free Swansea and the Students’ Union. Our Students’ Union Officers have been really busy supporting the launch of the campaign; we’ve now got at least 30 Refill stations located across our Bay and Singleton Park campuses for the whole community to use!

To find out more about Refill go to www.refill.org.uk.

Over the summer vacation, we became the first university in Wales to launch an in-house Ride Leadership Programme in partnership with Welsh Cycling.

The new programme is for the whole community and aims to encourage more people in the University and local community to cycle by offering regular led rides which provide a safe environment in which cyclists of all levels can:

The programme aims to develop a team of enthusiasts who have a passion for cycling and want to share it with others. We now have twenty qualified Ride Leaders at the University made up of staff and students and representing a range of Academic Colleges and Professional Service Units. Our Ride Leaders are now fully qualified to deliver guided bike rides to the University and local community.

The initiative has got off to a fantastic start, with over twenty guided rides already under the Ride Leaders’ belts, and there are many more planned to take place over the coming weeks and months.

“I’m absolutely delighted to have been able to work with Welsh Cycling to bring this fantastic scheme to the University.

“For me getting our students and staff on their bikes is a top priority. It’s not only important to us from a sustainability perspective, but it’s also great for wellbeing, because it’s good for your physical health, your mental health, your social life and your bank balance!

“This Ride Leadership Programme is another great cycling initiative for the University, offering our staff and students the opportunity to participate in group rides led by keen cyclists"

Jayne added: “Anyone can take part in the group rides and if they don’t have their own bike they can hop on a Santander Cycle. The rides are really inclusive and great fun and we’ll be running lots of them throughout the year. As it’s fast approaching pantomime season, the next ride, ‘Jack and the Beanstalk Ride to the Giant Store’ will take cyclists to visit our friends at the Giant Store (Tredz) to get some bike maintenance advice and the chance to grab some bike accessories at a discounted rate."

To find out more and to book your place on one of our guided rides visit www.letsride.co.uk, or you can get in touch with Jayne directly at J.Cornelius@swansea.ac.uk.

Swansea University's Biodiversity Officer has secured £4,000 worth of funding from Grow Wild for the development of a post-industrial wildflower garden to be located at the Bay Campus.

Biodiversity Officer Ben Sampson has been working closely with staff and students to develop the new garden at the Bay Campus which will greatly enhance the experience at the campus and improve campus biodiversity.

Planting events involving University students and staff have taken place on site and the gardens are set to open soon with an official launch. Watch this space...

“This great project will demonstrate the beauty of “weeds”, show how wildflowers can be used to boost the wildlife value of our cities and crucially, connect the Bay Campus with its industrial past. Bees and other pollinators have had a tough time in recent years, but by planting suitable flowers in our gardens we can help to turn this around.”

If you're interested in finding out more or getting involved in this fantastic initiative, get in touch with Ben at Benjamin.Sampson@swansea.ac.uk.

You can read more about the wildflower garden here.

Find out more about the fantastic work Ben does to improve biodiversity on campus here.

From 18th – 29th March 2019 the Swansea University Students' Union held the 2019 Go Green Fortnight, an annual event focussed on widening staff and students' awareness of a range of sustainability topics. Building on the continuing growth of previous years, the 2019 event was spread over a fortnight and included a wide range of events at various University sites. The Go Green Fortnight was closed with a bang with an enlightening panel discussion on a topic that has a growing groundswell of support.

Work has already begun in planning Go Green Fortnight 2020 so if you have any ideas, want to see a particular event being hosted or want to get involved please contact the Sustainability Team. 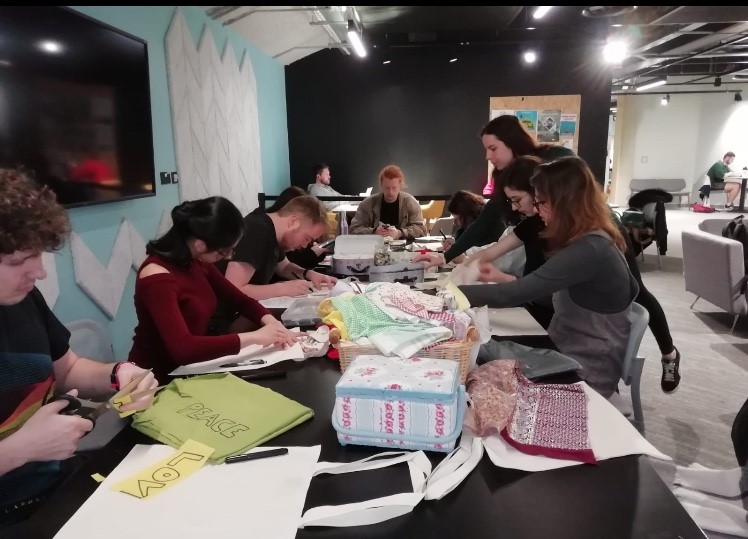 It is not just Swansea University that is planning for a big birthday next year, Howells Butchers Ltd in Penclawdd, Swansea are also preparing to turn 100 next year and celebrate its centenary.

Howells is one of the longest established Gower family butchers and has been working in partnership with Swansea University for the past 20 years as our local meat supplier. They are proud to offer local Welsh free range lamb and beef, as well as free-range turkeys and pork from Pembrokeshire. A particular local favourite is the salt marsh lamb, which is born and reared on the salt marshes of the Loughor estuary right across the road from the shop. Now that is local!

Christian Howells, the current owner, is the fourth generation of Howells to run the family business set up by his Great Grandmother, Harriot in 1920. Christian explains “it was really quite unusual for a woman to set up a business during this time, particularly a butchers, we are really proud of our local heritage and links with the local area and community”.

Neil Griffiths, our catering manager, is proud of the relationship Swansea University have developed with Howells “we can truly offer our staff and students a local food experience, knowing that we have reduced our environmental impact, improved the welfare of the animal and supported a local business and community”.

As part of our continual objective to reduce the waste generated by the University, through promoting prevention, reuse, recycling and recovery; we work with a range of local charitable organisations donating good quality, used furniture and other smaller items for reuse. Donated items result from departmental refurbishments, and relocations in addition to changes in working operations, whereby items are no longer practical nor required for the space or service.  By donating desks, chairs, pedestal drawers, filing cabinets, recycling bins and crockery to name but a few, for reuse; we are minimising our environmental impact, and reducing our combined carbon footprint, whilst also strengthening our links with schools and charities.

Julian Kennedy, Head of Ysgol Dyffryn Taf thanked the Sustainability team for the donation of chairs, desks and bins and explained that “leaving aside the practical and financial benefits to the school, it is good to be involved in a programme which helps promote sustainability and reduces waste, whilst also helping to strengthen the links with the school and one of the potentially key destinations for our Sixth Form students.” 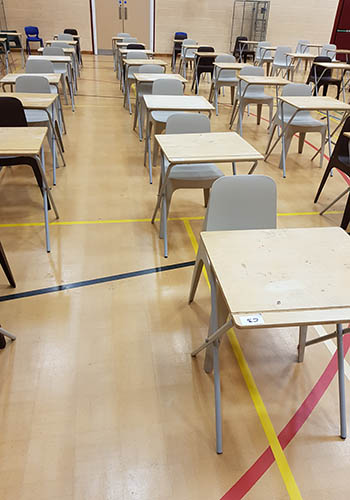 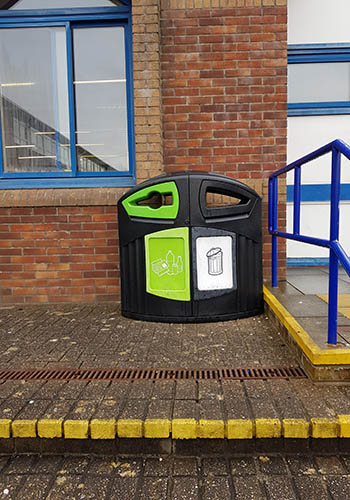 Mark Tribe, School Caretaker at Llangyfelach Primary school explained that “the newly acquired bins have been welcomed at the school and have made such a positive difference, as previously we had to make do with cardboard bins due to a lack of funds. The pupils are enjoying using them as part of our continuous recycling process.” 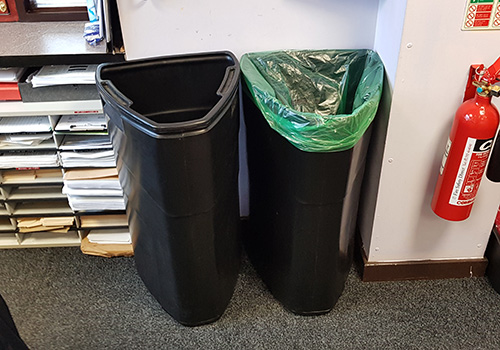 If you know of a charitable organisation that you think could benefit from our reuse scheme; please contact the Sustainability Team.