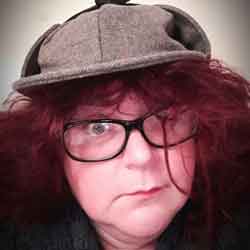 A comedy writer and performer since the age of 21, when she became a finalist in BBC1’s The Stand up Show. A contribution writer of sketches for radio she reviewed DVDs and briefly presented the Comedy Zone on BBC Radio 7. Her radio comedy “Death Plays Black” was shortlisted as part of the BBC Witty and Twisted series and she was commissioned to write and perform a short promotional film for the BBC Summer of British Film.

Specialising in script writing for radio, television and film she has been a commissioned writer for Talkback Thames projects, written and produced award winning short films, and continues to write and perform the internationally touring show The Bad Film Club.

As well as script writing, Nicko’s passion for Sherlock Holmes has seen her develop a publication arm for the World’s largest Sherlock Holmes Publishing House, MX Publishing. Orange Pip Books are aimed at young readers with a focus on representing LGBTQ, BAME and Female storylines, as well as the more quirky AU Holmes stories.