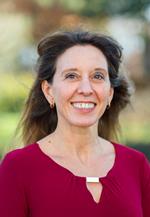 Professor Nuria Lorenzo-Dus joined Swansea University in 2001. She was awarded in 2011 a Personal Chair in the Department of Applied Linguistics and has served since 2017 as the University’s Dean of Postgraduate Research.

In 2010 Nuria founded Swansea University’s Language Research Centre, which she directed until 2015. During that time, she also served as Chair of the International Association for the Study of Spanish in Society. In addition, Nuria is centrally involved in Swansea University’s Cyber Threats Research Centre and serves on the management board of the University’s Digital Humanities Centre. She has held visiting research positions in Argentina, Australia, Brazil, New Zealand, Spain and the USA, and regularly delivers public engagement sessions and media communications on aspects linked to her research expertise.

Nuria uses Discourse Analysis to examine interpersonal and intergroup interaction in broadcast (initially) and digital (since approximately 2010) media contexts. Her research has greatly benefitted from substantial research funding over the years, including from the United Kingdom Research Councils (e.g. AHRC and EPSRC) and charities (e.g. The Leverhulme Trust) as well as from collaboration with teams in Spain and Latin America. She is the author of several books and numerous journal articles and book chapters (see Publications tab for details). Nuria is a member of the Editorial Board for the journals Memory Studies, Journal of Language Aggression and Conflict, Internet Pragmatics, Cadernos de Linguagem e Sociedade, and Estudios de Lingüística Inglesa Aplicada.

Of particular note within Professor Nuria Lorenzo-Dus’ work on digital manipulation is her 2021-2022 project DRAGON-S (Developing Resistance Against Grooming Online – Spot and Shield). Swansea University gratefully acknowledges financial support provided for this Programme by the End Violence Fund. This project will offer tools based on integrating Artificial Intelligence/Linguistics to keep children safe online.