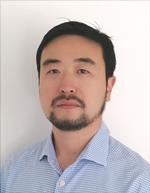 Jiaxiang Zhang is a Professor of Artificial Intelligence at the Department of Computer Science. His research focuses on human and machine intelligence. He combines computational modelling, machine learning, brain imaging, and experimental approaches to understand human cognition, ageing, and cognitive deficits in neurological and psychiatric disorders. On machine intelligence, he is interested in developing artificial agents to mimic the human capacity of complex cognitive operation and social interaction.

Professor Zhang received his PhD in Computational Neuroscience from the University of Bristol. He was a research fellow at the University of Birmingham (2008-10) and an investigator scientist at the MRC Cognition and Brain Sciences Unit, University of Cambridge (2010-14). From 2015-22, he was a faculty member at Cardiff University (Lecturer 2015-17, Senior Lecturer 2017-21, Reader 2021-22), where he set up the Cognition and Computational Brain Lab. He is the PI or Co-I of research grants from the ERC, MRC, BBSRC and the Wellcome Trust.