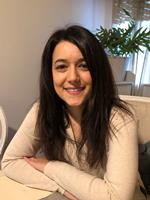 Ersin is an ancient historian whose research primarily focuses on the history and material culture of Cyprus.

Her first monograph, Revaluing Roman Cyprus: Local Identity on an Island in Antiquity, was published with Oxford University Press in 2021. This work champions Cyprus as a rich and rewarding Roman province to study on account of its dynamic culture and society under Roman rule and its participation in the wider Empire, but particularly because of the ways its cities, and their inhabitants, maintained, and articulated, their deep-rooted cultural ties with multiple landscapes across the Mediterranean.

Ersin continues to explore interpretations of Cyprus as a real and imagined landscape.

The history of Cypriot artefacts, and their display, in museums and responses to Cyprus in visual art are crucial aspects of her research on receptions of the island’s history.

She is also researches the cultural value of metals in antiquity, notably copper – a metal synonymous with Cypriot identity, as well as the legacies of industrial mining sites as heritage landscapes. Ersin is currently working on her second monograph which investigates the production and consumption of metals in Ptolemaic and Roman Cyprus.

The administrative roles that Ersin undertakes include:

In November 2017 they hosted the art exhibition 33° 3’ 45’’ East at the Cyprus High Commission (London). This event presented a series of work created by Yorgos in response to their combined research on the island’s physical environment, notably the legacy of its mining landscapes. It drew specialist and non-specialist audiences and was featured as part of the online documentary series Κύπριοι του κόσμου.

They are currently preparing a joint publication that will explore the materiality of copper and Cyprus’ copper-rich landscape.

Ersin works closely with the Egypt Centre to develop new pedagogical expertise in object-centered learning. In 2020, she was awarded a Public Engagement Grant by the Institute of Classical Studies to support the installation of a new exhibit Egypt and its Neighbours. The case will display Cypriot artefacts held by the museum that have not been on display to the public before.