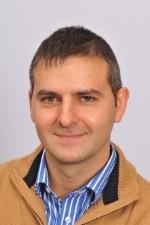 Prof. Antonio J. Gil graduated as Ingeniero de Caminos, Canales y Puertos from the University of Granada (Spain) in June 1999 (ranked 1st nationally) after having spent one academic year (1998-1999) in the University of California Davis fully funded by a prestigious California scholarship programme. After a two-year Certificate of Advanced Studies (MSc) in the field of Computational Mechanics, he moved to Swansea University where he completed his PhD in the field of computational analysis of nonlinear structural membranes in January 2005 (winner of the UK Association of Computational Mechanics best PhD paper 2004).

Having been awarded the National 1st Prize by the Spanish Ministry of Education in 2000, he has since received a number of further research prizes both as Principal Investigator and PhD supervisor, including the prestigious UK Philip Leverhulme Prize in 2011 and the ECCOMAS 2016 Olgierd Cecil Zienkiewicz award for his contributions as a young investigator in the field of computational mechanics.

I am a passionate academic who enjoys teaching both undergraduate and postgraduate students. Over the years, I have taught a variety of courses closely linked to my background as Civil Engineer and my research in the area of computational mechanics. Specifically, I have tught courses on Structural Mechanics, Geomechanics, Reinforced Concrete Design, Nonlinear Continuum Mechanics and Numerical Analysis.

In 2019, I was awarded the Swansea University Teaching Excellence Award for the quality of my teaching in subjects within the degree of Civil Engineering.

I am currently the coordinator at Swansea University of the Erasmus Mundus PhD programme in Simulation in Engineering and Entrepreneurship Development.

Recently, my research work has focused in the in-silico simulation of soft robotics components. Specifically, I have been looking at electro-mechanical formulation of highly deformable actuators, their Finite Element computational implementation, their High Performance computing and optimum solver resolution. In addition, I have explored the stability of soft actuators for long duration programmable functioning and the topology optimisation of deformable elastomers.

2011 The Philip Leverhulme Prize awarded by The Leverhulme Trust (UK)

2004 Honorary Mention to the Hangai Medal in “Shell and Spatial structures: from models to realization”, IASS Montpellier (France)