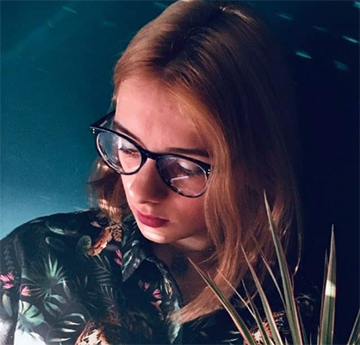 I am a first-year student of Journalism, Media and Communications on Singleton Campus who is interested in politics, films, drag and formula 1. I have not always been an open and tolerant person. It changed when I started reading and looking for more information about people who were different than me. I believe that by education and willingness to understand others, we can make our world at least a slightly better place.

To celebrate International Women’s Day, Swansea University dedicated a whole week for various events which drew attention to the discrimination that still affects women. Three events that I attended were different but each of them was elevating.

Natalie Ann Holborow. Lizzie is a poet born in Gower, has gained recognition and was awarded with many prizes. When asked about the most transformative event for her as a poet, she talked about her journey to Cracow and a poet who is the most inspirational for her - Czeslaw Milosz. She put an emphasis on matters that are close to her - such as ecology, immigration and also how she immersed into European culture. Natalie on the other hand claimed that she and her poetry have changed due to her journey to the East. The poet talked about orientalisation and how an artist should approach that issue so as not to offend anyone. Her poetry is also a mirror of her own problem, her little demons, such as eating disorders and anxiety. By sharing that experience, she said, she felt empowered. As both poets are connected with Swansea University, it would be great to support them and buy their pamphlets.

On the 9th of March an event called Daring to Be Different happened. It was a conversation with three different, but amazing women who in different ways have succeeded. The first one was Jill Nalder, a West End actress who inspired Russell T Davies to write the show, It’s A Sin, which touched on 1980s AIDS pandemic. She lost three friends during those times who, as she said, ‘has just disappeared’. She has helped set up a charity West End Cares, which raised over £2 million in its first few years. Now it is called Theatre MAD (Make a Difference). The second guest was Rosaleen Moriarty-Simmonds who was born without legs or arms. She is an activist who fights for equality for disabled people. She has talked about obstacles which people like her have to overcome that for people without any disabilities are everyday activities - such as access transport, having an independent life or relationships. She was honoured with an OBE by the Queen and believes that she is not the only disabled person who can be successful. The last was Jo Cracknell who works for Vodafone. During her work she has faced discrimination and sexism. Now, as she succeeded, she wants to show other women that being female is not a problem to achieve success.

The last event Encouraging Inclusivity by Choosing to Challenge Inequality happened on 10th of March and was a presentation by Dr Omolabake Fakunle, a Chancellor’s Fellow at the University of Edinburgh. She talked about actions that we as students and University staff have to take in order to be inclusive. Fakunle showed statistics to underline how few women are in computing degree programmes and how those numbers have fallen over a few years. The situation of women of colour is even worse and shows that what we are doing is not enough. She also wanted to raise awareness about students who have other responsibilities, such as kids and that we have to understand them and help them in the best way. The silence of those is not always a consequence of their dislike of talking but sometimes of lack of inclusivity. If we want to be inclusive, we have to think about those who are voiceless.

The International Women's Day is not only a celebration of what we have achieved over recent decades but also a continuous fight about everyone, even those who we do not understand. We have to think about our privileges and how we can use them to help those who do not have them. The only world we can live in, is an equal world for everyone. Stand for those who cannot fight for themselves.

In light of recent events connected to Sarah Everard’s death, we would like to assure that Swansea University is not a place that accepts events like that. If you do not feel safe, you can collect a rape alarm from MyUniHub from both campuses. You can also join Walk-Safe: Swansea, a group on Facebook where you can ask people to join you on your walk. Please remember that it is never your fault and it is a crime to sexually harass anyone. If you have been harassed, you should contact police and you can also use psychological help offered by Swansea University. You are not alone!