The creation of legally regulated cannabis markets in a number of US states and, at the national level, in Uruguay has generated tensions within the UN drug control regime and shaken the foundations of the prohibition oriented “Vienna consensus” that has dominated international drug policy for several decades. What’s more, further voter referenda on cannabis regulation in the US are certain with various Latin American and Caribbean states increasingly debating alternatives to prohibition of the drug.  Within this context, this project page aims to provide a useful resource for those interested in the latest policy developments around cannabis within the Americas and beyond - including the broader historical context in which they are taking place.

This section holds details of our technical advisors working in this issue area:

The Environmental Impacts of the Legalization of Cannabis in California

The Environmental Impacts of the Legalization of Cannabis in California

In November 2016, Proposition 64 was passed in California allowing for the legalization of recreational cannabis use. The measure came into effect on January 1, 2018 with California joining 28 other US states that have legislated for the medical and/or recreational use of cannabis. Cannabis legalization in California is expected to generate $3.7 billion in sales in 2018, but requires policy initiatives to mitigate potential negative environmental impacts. California is in a unique position to create a sustainable cannabis industry....

Read or download the full analysis here: Environmental Impacts of the Legalization of Cannabis in California

In recent years, the international debate on drug policy reform has intensified, and with it has come a productive exchange of information between academics, activists and advocates on the diverse models and approaches in different countries. Portugal’s decriminalization model is the subject of numerous reports and articles, the legalization of cannabis in a number of U.S. states and Uruguay is heavily studied. Heroin-Assisted Treatment (HAT) in Switzerland is often discussed, and the Czech Republic’s progressive drug policy has been much heralded. On the outside looking in is Spain, a country with a curious mix of cannabis clubs, decriminalization of drug possession for personal use, innovative harm reduction policies, drug checking, and more. It also occupies an interesting geographical position as a transit hub for drugs entering Europe from the Americas and North Africa. Yet in mainstream drug policy discussions, little is known of the Spanish approach to drug policy... 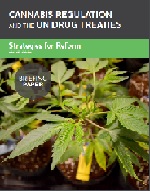 As jurisdictions enact reforms creating legal access to cannabis for purposes other than exclusively “medical and scientific,” tensions surrounding the existing UN drug treaties and evolving law and practice in Member States continue to grow. How might governments and the UN system address these growing tensions in ways that acknowledge the policy shifts underway and help to modernize the drug treaty regime itself, and thereby reinforce the UN pillars of human rights, development, peace and security, and the rule of law?

‌Watch the footage: 'Cannabis and the Conventions UNGASS and Beyond' at UNGASS 2016

In November 2012, Washington, Colorado, and Oregon voted on ballot initiatives to establish legally regulated markets for the production, sale, use and taxation of cannabis.1 Washington and Colorado’s measures won by wide margins, while Oregon’s lost soundly. A majority of voters view cannabis in a negative light, but also feel that prohibition for non-medical and non-scientific purposes is not working. As a result, they are more likely to support well-crafted reform policies that include strong regulations and direct tax revenue to worthy causes such as public health and education.  Selling Cannabis Regulation; Learning From Ballot Initiatives in the United States in 2012 reviews and analyses what may lie behind the successes and failures of the ballot measures in Washington, Colorado and Oregon, as well as examine the changing national context for cannabis reform. It concludes by bringing together some of the lessons learned within these states in what has been referred to as the process of ‘selling’ policy ideas to the voting public.

Legally regulated cannabis markets in the US: Implications and Possibilities

‌This new report from the Global Drug Policy Observatory analyses the developments in cannabis policy in the United States in order to understand the domestic and global implications as well as the potential for further changes within the US.  It begins with an attempt to locate recent changes in US cannabis policy within a historical framework going back to the 1970s.   The briefing then summarises the details of the planned regulative frameworks for recreational cannabis within Washington and Colorado and highlights both similarities and differences in approach.  It also outlines the status and details of similar reformist endeavours that have taken place in other US states during 2013.

View the Cannabis policy in the US: Implications and Possibilities PDF

Click on the following link to read the TNI/GDPO Press Release on cannabis policy and the INCB’s Report for 2013.

The Rise and Decline of Cannabis Prohibition

Released the day before UN member states gather in Vienna for a ‘High Level Segment’ of the annual UN Commission on Narcotic Drugs (CND), The Rise and Decline of Cannabis Prohibition: the History of Cannabis in the UN drug control system and options for reform - by the Transnational Institute and the Global Drug Policy Observatory - outlines different options that reform-minded states could follow to address the inconsistencies and failures of prohibition oriented drug policies in recent decades.  The report unveils the long and little-known history of cannabis regulation from the late 19th century when it was widely used for pharmaceutical, medical, ceremonial and social purposes to the post-WWII period when US pressure and a potent mix of moralistic rhetoric and unreliable scientific data succeeded in categorising cannabis as a drug with ‘dangerous properties’ on a par with heroin in the 1961 Single Convention on Narcotic Drugs. It also brings the history up-to-date with more recent developments as countries and jurisdictions from Portugal to Uruguay and states within the US have increasingly challenged its narrow legal strictures.

Click here to read a summary of the report in French

Cannabis and the Conventions: UNGASS and Beyond

International Impacts of the U.S. Trend toward Legal Marijuana

Mark Kleiman discusses Marijuana reform in the US

Martin Jelsma on the Uruguayan cannabis legislative and regulation process

Nothing is more timely than the establishment and operation of an observatory to provide analysis and to allow policy reforms to be based on evidence: evidence of failures and evidence of successes.