Engineering at Swansea University has an extensive track record of industrial collaboration and has significantly contributed to a number of prestigious projects. From the aerodynamic design of the THRUST Supersonic Car, which currently holds the world land-speed record, to aerodynamically designing the BLOODHOUND Supersonic Car.‌

This will see the  our involvement in pushing the boundaries of engineering and builds on the previous success of working on the THRUST Supersonic Car.

The Computer Fluid Dynamics (CFD) research for BLOODHOUND SSC is taking place at the Zienkiewicz Centre for Computational Engineering. These computational models have already influenced significant design aspects of BLOODHOUND including the front wheel configuration, the shape of the nose, the jet engine intake shaping, rear wheel fairings and wing shape and size. The CFD modelling continues to be one of the prominent tools used to develop the surface geometry of BLOODHOUND.

What is Computational Fluid Dynamics? 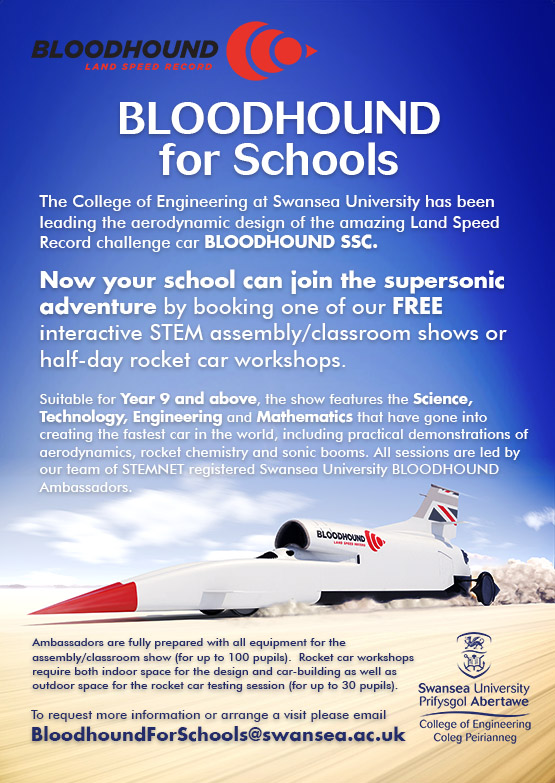 Project Role: Ben is a key member of the BLOODHOUND SSC design team who is responsible for the CFD simulations of the vehicle aerodynamics.

On being an Engineer: “Ever since I can remember I have been fascinated by mathematics and physics. I have always enjoyed asking the question ‘but why does it happen like that?’ and have sought to find solutions to problems.

This naturally led me to want to take my Physics and Maths A-levels to the next step and really apply the theory I was learning in school to challenges in the ‘real world’.

One of the obvious ways of achieving was to study Engineering. At the end of my undergraduate degree in Aerospace and Aerothermal Engineering it felt like it was right for me to continue in academia and so embarked on a PhD at Swansea University in a field known as CFD (computational fluid dynamics).

It was becoming apparent to me that in the 21st century the vast majority of aerodynamics problems were being tackled, at least in part, using the new computational modelling techniques that Swansea had made itself famous for pioneering.

It was the transition to Swansea that amazingly ended up providing me with the opportunity to get involved with the BLOODHOUND SSC project and joining the design team to work on aerodynamics alongside Ron Ayers.