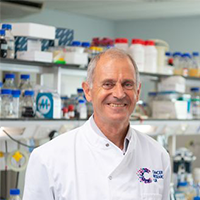 Professor Dyson is a molecular microbiologist who leads a research group focussing on exploiting useful bacteria for medicine and biotechnology.

Professor Dyson graduated with a BSc from the University of East Anglia, a PhD from Glasgow University and DSc from Swansea University. His research career included periods in Canada, Germany and France.

His research has led to 4 patents covering areas such as antibiotic-producing soil bacteria, using symbiotic bacteria to silence gene expression in insects, and exploiting tumour-targeting bacteria for both early detection of cancer and delivery of therapeutics.

Professor Dyson contributes to the Genetics and Biochemistry degree schemes. He teaches and co-ordinates a final year module on Animal Development, and contributes to modules on Molecular Microbiology, Human Genetics and Biotechnology. He is an academic mentor for under- and post-graduate students and supervises several undergraduate and masters research projects each year.

Antibiotic resistance is recognised by the WHO as a global threat to human health. Two-thirds of our frontline antibiotics are produced by soil bacteria called Streptomyces. We are discovering new species of these amazing bacteria, sourced from various environments, that have the potential to produce new antibiotics to combat the threat of resistance to the existing frontline antibiotics.

Insect vectors of human, animal and plant diseases are currently controlled by indiscriminate use of chemical insecticides that also harm beneficial species such as bees.  Pest insects are renowned for evolving resistance to these insecticides.  With support from the UK BBSRC, we have developed and patented a new highly targeted technology that uses symbiotic bacteria specific to an insect pest species.  The bacteria deliver information to silence specific genes in the insect host, with the consequence that the insects die or cannot reproduce.

Cancer chemotherapies or radiotherapies are widely used to treat patients, but with severe toxic side-effects.  Moreover, tumours often evolve resistance to these treatments.  With support from CRUK and the Welsh Government, we have been using tumour-targeting bacteria both for early detection of colorectal cancer, and also for delivering therapeutic payloads to stop tumour cell growth.  Unlike conventional treatments, this a highly targeted therapy with no significant side-effects observed in preclinical trials.

Our patented technology for cancer therapy was recognised as one of the UK’s 100 best breakthroughs for its significant impact on people’s everyday lives by Universities UK in 2018.

Professor Dyson collaborates with scientists at the Chinese Academy of Sciences at Lanzhou University, where he has been a visiting Professor,  investigating Streptomyces sourced from extreme environments such as the Gobi desert.