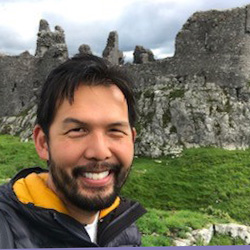 Ian is a Latin literature specialist with a strong interest in Roman cultural history. His Cambridge PhD, Lucilius and the Archaeology of Roman Satire, supervised by Emily Gowers, treated the inventor, Gaius Lucilius (c. 180-103/2 BCE), of Roman verse satire. This research has been published in numerous journal articles and book chapters. In 2021 Ian received an Excellence in Learning and Teaching Award from Swansea University. He is an External Examiner for Latin at the University of Sheffield, was a Trustee of the Roman Society from 2019 to 2022 and is a Council Member of the Classical Association.

Ian’s current major project is a monograph under contract for Bloomsbury, Scipionic Family History in the Roman Republic and Beyond. It is the first ever analysis in English of the literary legacy, typified by confusion, of the gens Cornelia. A particular interest is how resilient the family was in the face of failure both military and political. Ian is also working on various topics in Latin poetry, including the editing of a collection on the elegist Tibullus, and pieces on Virgil’s Eclogues, Ennius’ Hedyphagetica, the pseudo-Virgilian Moretum, and rhetoric in Roman satire. His next major project will be a commentary on Columella’s De Agri Cultura Book 12, and another future monograph will focus on vomiting in the ancient imagination and experience.

Ian was born in Melbourne, Australia and lived until the age of 18 in Sydney, where he attended Sydney Grammar School. He did his undergraduate degree at Harvard, then an MPhil and PhD at Trinity College, in the University of Cambridge. He has taught at Cambridge, King's College London, the University of Manchester, Birkbeck, University of London, and the University of Exeter. In a past life he played the violin semi-professionally, and he is passionate about food, as his ongoing series for the Department YouTube channel, ‘The Food of Roman Verse’, available here, should make clear.

At Swansea Ian has taught the first-year module on Ovid’s Metamorphoses, honours modules on Roman love poetry and verse satire, an MA module on historical poetry, and numerous text-based language modules reading works from Virgil’s Georgics to Tacitus’ Histories. He has supervised Undergraduate and Postgraduate dissertations on a wide variety of topics including doors in Roman poetry, the myth of the Young Hero in Homer and West African ‘griot’ culture, prosopography in Statius’ Silvae, and classical influences on hip-hop.

Ian’s research on Lucilius has been published in prestigious journals such as the American Journal of Philology, Classical Philology, and Classical Quarterly, as well as several edited collections, and has contributed to a more sophisticated appreciation of what remains of his poetry. For more information, see here. He has also published on his research into elegy and vomit.

Ian has received bursaries from Gladstone’s Library and the Fondation Hardt, participated in an Erasmus exchange to Rostock, and was a fellow of the Advanced Seminar in Humanities at Venice International University.

He won one of Swansea University's Excellence in Learning and Teaching Awards in 2021.

Ian would welcome any enquiries from prospective students, at both undergraduate and postgraduate level, who are interested in any topics on this page, or Latin literature generally. As Admissions Tutor for Classics, Ancient History, and Egyptology, he’s keen to recruit students of all backgrounds who are interested in the ancient world, and to promote our engagement, outreach, and provision of opportunities.