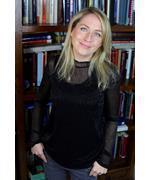 Laura Kalas is a specialist in medieval women’s literature. She is particularly interested in research that crosses disciplines, and the ways in which medieval medical discourse offers a useful lens through which to consider bodily, sensory and spiritual representations. Laura’s research explores the phenomena of medieval women's visionary, or ‘mystical’, experience, devotional texts, medieval theories of physiology, the senses and the emotions. Central to her work is the convergence between the medieval and the modern, particularly in relation to questions of health and wellbeing, and gender and sexuality.

Laura’s first book, Margery Kempe’s Spiritual Medicine: Suffering, Transformation and the Life Course, was published with D.S. Brewer in 2020. She is co-editing two volumes: Encountering The Book of Margery Kempe (Manchester University Press), and the medieval volume of a multi-volume series, A Cultural History of Women in Christianity (Routledge). She has contributed to The Literary Encyclopedia and has published articles in The Conversation and The Independent. Her work on the medical recipe at the end of The Book of Margery Kempe has been featured in The Guardian and in the BBC History Magazine.

Laura is the Co-Director of Swansea’s MHRC (Medical Humanities Research Centre) and a member of MEMO (the Centre for Medieval and Early Modern Research). She teaches modules on the literature and culture of the Middles Ages, gender and medicine, and literature more broadly. She would be interested to receive enquiries from prospective postgraduate researchers who would like to study PhD topics that relate to the above.

Articles for The Conversation:

February 13, 2017 Being lovesick was a real disease in the Middle Ages

November 17, 2016 Medieval women can teach us how to smash gender rules and the glass ceiling

Laura’s research on the faded recipe in the manuscript of The Book of Margery Kempe was featured in The Guardian, here. This research was also featured in the BBC History magazine.

In July 2017 Laura gave a public talk at The Minster, King’s Lynn (the birthplace of Margery Kempe). She was involved, as historical advisor, in a community production in King’s Lynn of Elizabeth MacDonald’s play Skirting Heresy in 2018. She was also involved with the production of a children’s book about Margery Kempe by the curators at True’s Yard Museum, King’s Lynn, in 2019.