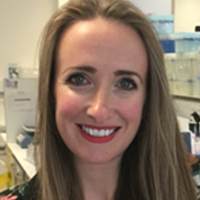 Anna Seager is a Research Officer employed on the European funded BEACON research project, which links research, entrepreneurship, and innovation within the S. Wales convergence region. Anna’s BEACON research has ranged from genetic analysis of plants treated with fertilizers to measuring toxicological profiles of the gastric pathogen Cryptosporidium. Prior research projects in Anna’s career have included developing tools to minimise the use of animals in experimental testing and toxicology research (NC3Rs).

Alongside her research role, Anna actively supports the Medical Schools teaching portfolio, delivering teaching on undergraduate and post-graduate courses, such as Cancer genetics and Pharmacology, and providing Academic mentorship to students. In 2018, Anna was awarded a fellowship of the Higher Education Academy based on her research-led approach to student learning.

Throughout her career Anna has been passionate about equality, diversity and inclusivity, which is reflected by her ongoing voluntary role as an Athena SWAN lead within the Medical School. Athena SWAN is a national scheme that aims to recognise and address equality issues by acknowledging that academia and HE cannot reach its full potential unless it can benefit from the talents of all. Anna’s commitment to EDI at Swansea University began in 2012 when she became a member of the University Athena SWAN team, and later a Lead in the Medical School’s Athena SWAN team in 2015. Anna runs the Athena SWAN seminar series which delivers workshops to staff and students (on topics such as assertiveness, promotions, unconscious bias, and writing skills), and is a member of the SUMS Equality and Diversity committee and the University’s Athena SWAN Strategy Group.

The success of the Medical School’s Athena SWAN team is reflected in their achievement of a successful Bronze award in 2014, a prestigious Silver award in 2016, and an extended Silver award in 2019 from Advance HE. The team also received recognition at the first annual SUMS awards 2015 collecting the Dean's Award for Outstanding Collaboration.

Anna’s personal contribution to EDI within the University was recognised by her attainment of the Mary Williams Award 2019.