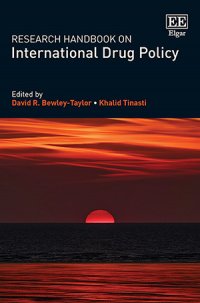 Analysing arguably one of the most controversial areas in public policy, this pioneering Research Handbook brings together contributions from expert researchers to provide a global overview of the shifting dynamics of drug policy. Emphasising connections between the domestic and the international, contributors illustrate the intersections between drug policy, human rights obligations and the 2030 Sustainable Development Agenda, offering an insightful analysis of the regional dynamics of drug control and the contemporary and emerging problems it is facing.

WHO cannabis rescheduling and its relevance for the Caribbean 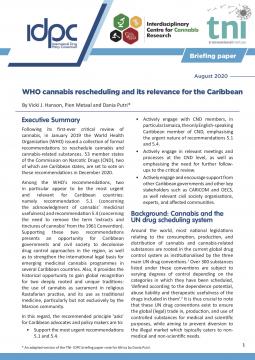 Following its first-ever critical review of cannabis, in January 2019 the World Health Organization (WHO) issued a collection of formal recommendations to reschedule cannabis and cannabis-related substances. 53 member states of the Commission on Narcotic Drugs (CND), two of which are Caribbean states, are set to vote on these recommendations in December 2020.

Read the full report: WHO cannabis rescheduling and its relevance for the Caribbean

With the Ministerial Declaration of March 2019 having ostensibly set the direction of international drug policy for the next decade or so, the launch of the 2019 World Drug Report only three months later was arguably surrounded by less expectation than the year before. Then, while missing the opportunity to provide a review of progress made in the 10 years since the Political Declaration, its contents still had the potential to feed directly into the deliberations surrounding the UN’s latest soft law instrument pertaining to drugs. Nonetheless, as is the case regardless of the UN’s own review cycle, the World Drug Report remains significant. Not only does it provide much needed information to member states about the global drug situation, generally referred to simply as the ‘world drug problem’, but its contents also do much to set the ‘mood music’ for debates within the Commission on Narcotic Drugs (CND or Commission), the UN’s central policy making body on the issue, as well as signpost key points for discussion beyond the rarefied conference rooms of the United Nations Office in Vienna. And so it was that this year’s edition of the United Nations Office on Drugs and Crime (UNODC or Office) flagship publication was launched in the Austrian capital on – as is traditional – 26 June; the United Nations International Day against Drug Abuse and Illicit Trafficking.

Cannabis in the City: Developments in local cannabis regulation in Europe

This paper examines six European countries – Belgium, Denmark, Germany, the Netherlands, Spain and Switzerland – in order to better understand the tools being used – and the challenges faced – by municipal and regional governments calling for different cannabis policies. Although the national contexts, histories, legislation, state structures, and social contexts of these countries vary significantly, there are important lessons to be learned by comparing different approaches. This paper draws on Country Reports (published separately) which were written by researchers within each country, which offer a more detailed exploration of the respective reform efforts, as well as of the national political and policy environment.

The picture that emerges from this research is one of municipalities and regions struggling within restrictive policy frameworks. This report opens with a discussion of the combined challenges that have created the current impasse in cannabis regulation at the UN, European Union (EU), and national level. This is followed by a short introduction to the history and context of cannabis regulation and reform in each of the six countries, and some of the research findings.

GDPO Research Associate Dr Chris Hallam's beautifully crafted monograph traces the history of the London 'white drugs' (opiate and cocaine) subculture from the First World War to the end of the classic 'British System' of drug prescribing in the 1960s. It also examines the regulatory forces that tried to suppress non-medical drug use, in both their medical and juridical forms. Drugs subcultures were previously thought to have begun as part of the post-war youth culture, but in fact they existed from at least the 1930s. In this book, two networks of drug users are explored, one emerging from the disaffected youth of the aristocracy, the other from the night-time economy of London's West End. Their drug use was caught up in a kind of dance whose steps represented cultural conflicts over identity and the modernism and Victorianism that coexisted in interwar Britain.

Click here to preview or buy on Amazon: White Drug Cultures and Regulation in London, 1916-1960