Prior to the UKRI FLF he held a Leverhulme Trust Early Career Fellowship at the University of Oxford (2015-2018), which exploited the unique volcanic ash fall record preserved in the annually laminated (varved) and intensely-dated sediments of Lake Suigetsu, Japan. This research has provided unrivalled insights into the tempo of ancient explosive eruptions at numerous Japanese volcanoes.

Prior to his Fellowship positions, he undertook PDRA positions at Swansea University (2014-2015), and the University of Oxford (2013-2014). The former position focused on the Holocene Tephrochronology of the Greenland ice cores and the identification of ash fall events associated with large caldera-forming eruptions.

He completed his doctorate in Geology at Royal Holloway University of London (RHUL; 2008-2012), this research was instrumental in refining the Tephrochronology of the Central Mediterranean. This research exploited detailed geochemical fingerprinting of volcanic glass (melt) compositions erupted at the different volcanoes of the region in order to better quantify eruptive events and the associated ash dispersals. Prior to his doctorate he completed an MSc in Quaternary Science at RHUL (2007) and a BSc in Geography at Swansea University (2005).

His current UKRI Future Leaders Fellowship (FLF) looks to set a new agenda in volcanic ash fall hazard assessments. To achieve this, his research exploits visible and microscopic (non-visible) volcanic ash (tephra) layers preserved in dense networks of marine and lake sediment cores situated away from their source volcano, in order to reconstruct comprehensive, long-term records of explosive volcanic activity (e.g., frequency and magnitude). His FLF initially concentrates on developing a framework for assessing long-term ash fall hazards in and around Japan, but with a view to implementing this approach globally.

His research combines fieldwork, which examines near-source pyroclastic successions at numerous volcanoes, with detailed laboratory based tephra investigations of sedimentary sequences, with the latter including the extraction of microscopic ash layers known as cryptotephra.

To accurately identify the volcanic source of far-travelled ash layers preserved in sedimentary successions, and to successfully integrate these into the known eruption record of a volcano, his research is all underpinned by detailed geochemical fingerprinting of the erupted volcanic glass. Fortunately, the volcanic glass component is dominant in both the pyroclastic deposits at the volcano and the distal ash layer, and critically the major and trace element signature of this erupted glass is often unique to an individual volcano. The major and trace element signature of the volcanic glass central to his research is determined by electron microprobe (EMP) and Laser ablation inductively coupled plasma mass spectrometry (LA-ICP-MS) analysis, respectively.

Following on from his doctoral research, Paul continues to be actively involved in Tephrochronological research in the Central Mediterranean, and in particular reconstructing the eruption histories of the active volcanoes of the region (e.g., Campi Flegrei, Vesuvius, Mount Etna and the Aeolian Islands).

With his research being focused on the volcanic ash fall records preserved in long palaeoclimate archives, and his keen interest in understanding Quaternary climate variability, he collaborates extensively with palaeoclimatologists to develop independent Tephrochronological frameworks capable of assessing the timing and spatial variability of past climatic change across Europe, East Asia and more recently Antarctica.

His research findings focused on identifying the volcanic sources of ash layers preserved in the iconic annually laminated sediments of Lake Suigetsu are incorporated into the permanent scientific displays at the Varve Museum opened in 2018 (http://varve-museum.pref.fukui.lg.jp/en/). The main exhibit at the museum is > 45 meter long, thin section of the lakes sediments. The Museum recorded > 45,000 visitors in its first 12 months of opening; he was also an invited scientific delegate to the Museums opening. 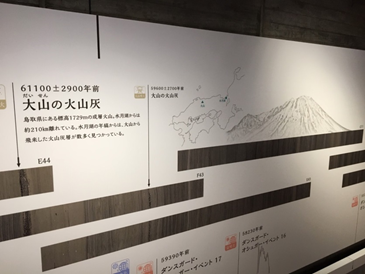