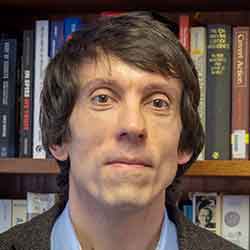 Dr Luca Trenta is an Associate Professor in International Relations in the Department of Political and Cultural Studies, Swansea University.

He held a 2017 British Academy Rising Star Engagement Award for his project: ‘Out of the Shadows: understanding, researching and teaching covert action.’ Through the project, Dr Trenta has carried out several engagement and outreach events in Welsh and English schools, as well as networking events for Early Career Researchers. Three podcast episodes are also available on Soundcloud and Apple Podcasts featuring topics such as covert operations and regime change. He previously received a British Academy Small Research grant for his project on 'Targeted killing? The recurrence of assassination is US foreign policy.'

His current research focuses mainly on the US government’s involvement in the assassination of foreign officials from the Cold War to the present day. He has published articles in IR, Intelligence Studies, and International Law journals. These include works on the Ford Administration and the development of the US ban on assassination, on the Obama Administration use (and legitimation of) targeted killing, and on the international adoption of an expanded notion of imminence to justify uses of forces in self-defence.

In 2020, Dr Trenta appeared in four episodes of the History Channel documentary Secret Wars Uncovered. He has worked with BBC Radio 3 on the Free Thinking programme as well as with the Being Human Festival for the Humanities. In collaboration with Professor Rory Cormac, Dr Trenta has organised a talk at the Hay-on-Wye International Book festival. With BBC Ideas he has produced a short movie on the history of assassination. He is also a regular contributor to The Conversation, Talk Radio, Nation Radio, and BBC Radio Wales.

I am conducting research in two main areas. First, I am researching the role of assassination and targeted killing in US foreign policy, and the extent to which national and international norms influenced policymaking. I have been exploring these issues through insights from constructivist scholarship in IR looking at processes of conceptual change and norm contestation. Second, I am developing interdisciplinary research on the impact of technology on international norms, international law, and international society.

Beyond these two main strands, I have recently developed an interest in the interconnection between post-apocalyptic fiction (cli-fi and pandemics driven) norms and International Relations.

2014: $20000 Texas Strategic Partnership, Swansea University and Bush School for organization of a workshop on the use of drones as a new platform of warfare. The workshop included US, UK, and EU academics, representatives from IISS (London) and the Remote Warfare Project (London).

2014: £800 College of Arts and Humanities, Swansea University, for participation at the New Orleans ISA conference.

2012: £3000 PhD Student Projects & Initiatives Scheme, Durham University, Faculty of Social Sciences and School of Government and International Affairs, grant for the organisation of a one-day conference on the Iran hostage crisis. Speakers included US and UK academics, as well as former hostage Ambassador John Limbert.

2012: €1700 European Association for American Studies Travel Grant for research and interviews in the US.

BBC Ideas, A short (and deadly) history of assassinations, 2019

Out of the Shadows Project (includes events, podcasts, and resources for schools): outoftheshadowsproject.com

I have organised and conducted more than 30 events with secondary schools as part of the Out of the Shadows project and of the broader University outreach strategy.