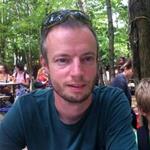 Ed has been a lecturer on the Mental Health Nursing team since autumn 2019. He qualified as a Nurse from the University of Nottingham in 2007, and worked in acute inpatient mental health services in numerous NHS Trusts in England and Health Boards in Wales for over ten tears.

His research interests cover the intersection of mental health, geography, environmentalism, and critical social theory. In 2016 he was awarded an MSc by Research in Social Theory and Space for his thesis “A wild schizoanalysis of mental distress in the spaces of modernity” – later published as a book “Modern Madness” from Winter Oak Press.

Since 2016 Ed has been conducting qualitative ethnographic research in the field of ecotherapy and nature based interventions as part of a PhD Fellowship awarded by RCBC Wales.

In addition to his role in the Department of Nursing Ed is developing and delivering the “Actif Woods Wales” programme of woodland based wellbeing interventions in Neath Port Talbot with the social forestry NGO ‘Coed Lleol’.