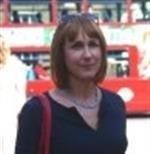 Joanna was an undergraduate and postgraduate student at Lodz University, Poland, where she completed a BA in English Literature and an MA in American Studies. She also had close links with the Lodz Film School.

Prior to Swansea University, Joanna was a Fulbright Fellow at the Department of Rhetoric and Film, University of California, Berkeley, where she was supervised by Prof. Linda Williams and worked on Hollywood cinema and feminist film theory.

On joining Swansea, Joanna completed her PhD looking at Polish directors and characters in British cinema. She gained the PGCert HE (Postgraduate Certificate in Learning and Teaching in Higher Education) and became a Fellow of the Higher Education Academy (FHEA). Joanna holds a Teaching Excellence Award from the University of Lodz.

Joanna’s research focuses on European, Eastern European and British cinema with particular emphasis on exile, migration and transnational film studies. She has written on émigré Polish directors – amongst others Roman Polanski, Krzysztof Kieslowski and Pawel Pawlikowski – as well as the representation of Polish migration in both Polish and British film and television. All Joanna’s research is implicitly or explicitly informed by gender studies and feminist film theory, and employs robust contextual analysis that informs aesthetic and thematic analyses of film and television texts.

She has published widely in the field of film and television. Most recently she has published on Shane Meadows for the Journal of British Cinema and Television, and on the representation of Polish migration to Great Britain in the Polish television series Londyń czycy/Londoners (2008 – 2009), the changing discourses of Eastern Europeannes in contemporary British cinema for Critical Studies in Television and Developments in Eastern European Cinema Since 1989 for The Routledge Companion to World Cinema (2017).