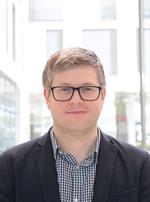 I am Senior Lecturer in Medieval History in the Department of History. I joined the department in 2016. I previously held lectureships at the University of Oxford (2013-2016) and a Junior Research Fellowship at the Institute of Historical Research, London, sponsored by the Scouloudi Foundation. I am a Fellow of the Royal Historical Society, and a Fellow of the Higher Education Academy.

My primary research interests relate to the history of Latin Christendom in the Central Middle Ages. My work has considered the theory and practice of historical writing, the transmission and reception of texts, medieval attitudes towards historical truth and the past, political thought on kingship, and the socio-cultural impact of the crusades in Latin Christendom. My first book, Godfrey of Bouillon: Duke of Lower Lotharingia, Ruler of Latin Jerusalem, c.1060-1100, was published by Routledge in 2018, and has since been published in paperback (2019) and in a Polish translation (2018). I have published articles in journals including the English Historical Review, the Journal of Ecclesiastical History, the Journal of Medieval History.

My current project, entitled 'Contested Pasts: public monuments and historical culture in Western Europe, 1815-1930’ (funded by the British Academy and Leverhulme Trust), explores the political uses of public monuments and statues in nineteenth-century European states. It focusses in particular on the creation of monuments depicting medieval figures in nineteenth-century Europe. My research has produced an article for the Journal of Victorian Culture, and a forthcoming monograph on the 1848 statue of Godfrey of Bouillon in Brussels.

Based on research I have pursued for my current project, I have written an article for History Today (‘Statues, politics and the past’, History Today, September 2019, pp. 90-93; and appeared in 2020 as a guest on the HistoryExtra podcast to discuss the statue of Richard I in Westminster (‘Lionheart of stone: the medieval statue debate’.