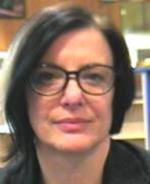 Sarah Gamble came to Swansea from the North-East of England in 2004, following academic posts at the University of Sunderland and the University of Northumbria. Her job title is Associate Professor of English with Gender, which neatly pairs her two main academic interests – twentieth and twenty-first century literature, and gender and queer theory.

As a scholar, she is a particular authority on the life and works of Angela Carter, on whom she published the first full-length scholarly monograph: Angela Carter: Writing from the Front Line in 1997. In 2004, she published Angela Carter: A Literary Life which, although not an official biography, read Carter’s life through the study of her writing. She is also the editor of The Routledge Guide to Feminism and Postfeminism and Angela Carter: A Reader’s Guide to Essential Criticism, and co-editor (with Caleb Silvyer and Jennifer Gustar) of Ludics and Laughter as Feminist Aesthetic: Angela Carter at Play (due 2021). In addition, she has published numerous articles on contemporary women’s fiction, the gothic and fantastic. She is currently embarking on a new monograph which aims to examine the influence of art on Angela Carter’s writing.

She teaches at both undergraduate and postgraduate level, and is committed to fostering student engagement through innovate and inventive teaching practices. In 2012 she was a recipient of a Distinguished Teaching Award.

Sarah Gamble teaches at all levels, from BA modules to individual PhD supervisions. She leads undergraduate modules on 19thC gothic, the vampire novel, gender in literature and animal studies.

She would be interested in receiving proposals for PhD. research into contemporary women’s writing (particularly the work of Angela Carter), the contemporary gothic and/or fantastic and queer literature.

Sarah Gamble is the author of two monographs on Angela Carter: Angela Carter: Writing from the Front Line (Edinburgh University Press, 1997) and Angela Carter: A Literary Life (Palgrave Macmillan, 2004). She is also the editor of Angela Carter: A Reader’s Guide to Essential Criticism and The Routledge Companion to Feminism and Postfeminism. In addition, she has published numerous scholarly articles on contemporary women’s writing and the Gothic. She is currently embarking on a project examining the influence of art and images on Angela Carter’s writing.