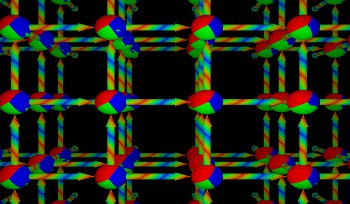 Our Particle Physics Theory group’s expertise in Beyond the Standard Model (BSM) physics involves particle physics simulations on supercomputers with bespoke code. Based on this work, we have realised the development and commercialisation of an open source tool, BSMBench, that enables benchmarking of supercomputer system performance. The unique property of the code is the capacity to vary computational and communication aspects simply by adjusting simple parameters of the theories it simulates. This makes it a powerful benchmarking tool for supercomputer systems.

Development of the original software was led by Swansea theorist, Professor Biagio Lucini. The packaging of the code into the benchmark tool was done in collaboration with IBM (Cambridge MA) along with Ed Bennett, then a Swansea PhD student (see this conference paper). IBM has been using BSMBench since 2011 to inform the design some of the planet’s most powerful HPC architectures.

BSMBench is being developed and commercialised by start-up, BSMbench Ltd. Lucini was a founder and is Chief Technical Officer of the company which has won EU convergence funding to advance and refine the software. BSMBench was released as an open source project in June 2012 and can be downloaded free of charge from www.bsmbench.org. It has had interest from several commercial organisations, including Fujitsu, Research in Motion (Blackberry), Jaguar, Land Rover, KLM and Microsoft, and the national computing centre, HPC Wales