A one day conference arranged by CREW

Appearing in 1958, Raymond Williams’s seminal volume Culture and Society offered a history of the ‘idea of culture’ as it developed in response to industrialism. Challenging dominant forms of elitism and paternalism, the book reinforced Williams’s claim that ‘culture is ordinary’ and sought to endorse the positive cultural values promoted by working class creativity. It was followed in 1961 by the publication of The Long Revolution written in parallel with it. In the 50 years since its publication Culture and Society has generated a great deal of criticism and debate. This one day symposium invites some of Britain’s most challenging thinkers to explore both the making and afterlife of Williams’s career-making volume and the political perspective of its companion . They have been invited to consider the broad framework he set out, in terms of culture, class, national identity, literature, politics and the nature of change.

Arranged by CREW (Centre for Research into the English Literature and Language of Wales), with support from the Raymond Williams Society, the conference is timely in that 2008 has seen the appearance of Professor Dai Smith’s celebrated biography of Williams, A Warrior’s Tale, and the handing over of the Raymond Williams Papers to the library at Swansea University.

For a Conference Report see the CREW Blog. 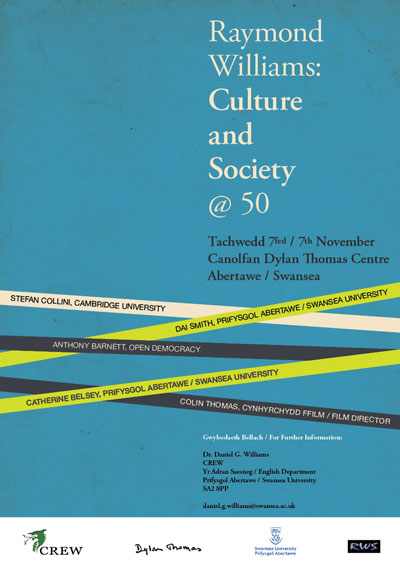