2020 is Swansea University’s Centenary year. To mark this, Dr Sam Blaxland from the History Department has written a book, Swansea University: Campus and Community in a Post-War World, 1945-2020. He has been researching and writing this for the past three and a half years.

The book is not just an intuitional study, it is also a social history of Britain since 1945, focusing on some of the major themes of that period, including the changing nature of youth culture, protest movements and politics, and the way universities have interacted with their communities, regions, policy makers, and the wider world. 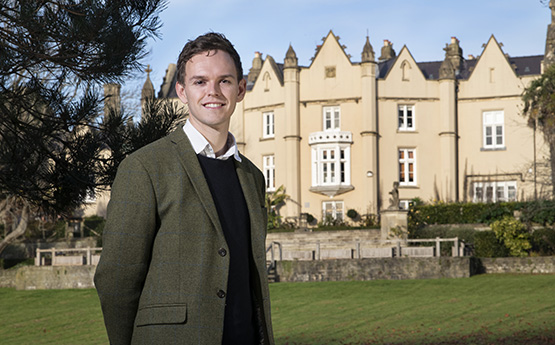 Alongside more traditional historical documents, housed at the University’s Richard Burton Archives, the book utilises nearly 100 oral history testimonies, collected specifically for this project since the beginning of 2017. As part of his research, Sam spoke to people from a huge range of time periods, subject areas, and job roles, including students, academic staff and non-academic staff like technicians and secretaries. The voices of the people who experienced the history are an integral part of the analysis of this work.

The centrality of the oral history testimonies, and the fact that post-war reconstruction so fundamentally changed the nature of Swansea University, are two key reasons why the time span of the book begins in 1945.

Professor Willian Whyte of the University of Oxford has said that the book is ‘deeply researched and elegantly written…[it is] essential reading for alumni, staff and students at Swansea. And it deserves a wider readership. It will appeal to all historians of higher education, to policy makers and university leaders, and to anyone interested in how the past may help shape the future of teaching and research in Wales and beyond’.

The book can be purchased via all the usual channels, including directly from the publishers, the University of Wales Press.

However, the University is delighted to be partnering with Swansea’s independent bookshop Cover to Cover to sell the work: sales@cover-to-cover.co.uk.

Dr Sam Blaxland was made a Post-doctoral Fellow in Swansea University's History Department in November 2016. He wrote a PhD thesis in the department between 2013-16. He was born and raised in Pembrokeshire and has since lived, worked, or studied in Cardiff, Swansea, London and Oxford. His broader research interests lie in the field of modern British political and social history. He is also a regular commentator on current affairs and appears regularly in the British and Welsh broadcast media, including as a studio pundit during the BBC's live overnight coverage of the 2019 general election. He has published in peer-reviewed journal articles and newspapers, and has spoken or given conference papers on his research in places like Oxford's Bodleian Library, Harvard University, and the Houses of Parliament in Westminster.

If you would like any information about this book, Sam would be delighted to hear from you.

If you would like to purchase it, please email sales@cover-to-cover.co.uk.