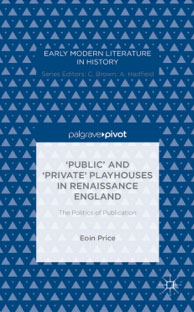 I am a Lecturer in English Literature specializing in the politics of playing and playgoing in sixteenth-and seventeenth-century London and in the afterlives of plays from this period in later centuries including our own. I am the author of ‘Public’ and ‘Private’ Playhouses in Renaissance England (Palgrave, 2015) and I am currently co-editing a collection of essays entitled English Renaissance Drama and the Politics of Domesticity for Manchester University Press. My next solo-project, Early Modern Drama and the Jacobean Aesthetic,queries the entrenched association of Jacobean theatre with lurid violence. In 2018 I received a Harry Ransom Center Research Fellowship to undertake archival work on this project. My work has also been recognized by my university, who have named me as one of seven Florence Mockeridge fellows.

I am actively involved with several major academic societies. I am the principal organizer of the 2019 British Shakespeare Association Conference which will take place at Swansea’s Singleton campus in July 2019. I am also a council member of the Society of Renaissance Studies for whom I act as the Welsh Representative and I am the theatre editor of the Marlowe Society of America Newsletter.