Swansea University’s Research Institute for Arts and Humanities (RIAH) has reflected on the resounding success of its series of public events, on the theme of ‘Heritage, Health and Wellbeing’, as part of last month’s national Being Human 2015 festival.

RIAH was chosen as one of five hubs across the UK for the festival, which ran from November 12-22, and hosted eight free public events. The events were made possible by a grant from the festival organisers, the School of Advanced Study, University of London, in partnership with the Arts and Humanities Research Council (AHRC), the British Academy (BA), and the Wellcome Trust.

Researchers and the public explored what it means to be human at venues across the city including the Hafod Morfa Copperworks, Clyne Farm Centre, the National Waterfront Museum, Swansea Museum Collections Centre and the University’s Singleton Park Campus. 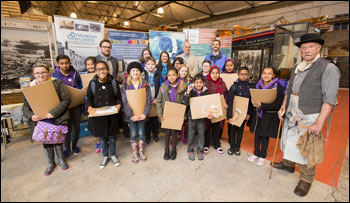 Dr Elaine Canning, Head of Swansea University’s Research Institute for Arts and Humanities (RIAH), in the College of Arts and Humanities, said: “Many thanks to all – staff, students, partner organisations, and most importantly members of the public – who supported and contributed to this year’s series of events for the Being Human festival.

“We had a hugely successful run of lectures, performances, workshops, competitions, debate and discussion, which had a wide reach and impact across the city – none of which would have been possible without the involvement and generosity of so many groups and individuals.

“There was a fantastic turnout across all the week’s events, with almost 400 people attending in total.

“We hope these events inspired, entertained, and encouraged debate and discussion around our chosen theme of ‘Heritage, Health and Wellbeing’ and we look forward to building on this success in future years.” 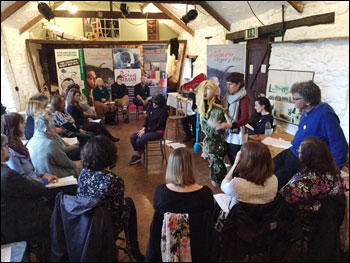 Professor Martin Stringer, Pro-Vice-Chancellor and the University’s lead for the Arts, Humanities and Social Sciences, said: “My congratulations to Dr Elaine Canning and her colleagues within RIAH, as well as the multitude of partners, collaborators and contributors who made this year’s events possible and took the very best of RIAH’s research into the wider community in such a meaningful and successful way.

‌“It is important the University recognises the very significant work that RIAH has done to engage the wider community through this year’s Being Human festival, bringing richer and closer links for the University – and we celebrate all they have achieved.”

This year’s public events organised by RIAH and its partners included: