Historian Dr Catherine Fletcher, a Renaissance expert, adviser to the BBC series Wolf Hall, and a BBC new generation thinker, is to join the College of Arts and Humanities at Swansea University, where she will lead the new MA in Heritage and History.

Dr Fletcher’s research area is Renaissance and early modern Europe, the world of the Tudors, Medici and Borgias.  She advised the set team on the TV adaptation of Wolf Hall and has broadcast for BBC Radio 4 on Italian Renaissance history.  Her biography of Duke Alessandro de’ Medici, nicknamed ‘the Moor of Florence’ and rumoured to be the son of an African slave, will be published in 2016.

She was chosen from over 500 applicants to be one of ten BBC New Generation Thinkers for 2015. Her first book, The Divorce of Henry VIII: The Untold Story, was published by Bodley Head in 2012 and was described by the Sunday Times as 'a glittering debut'. 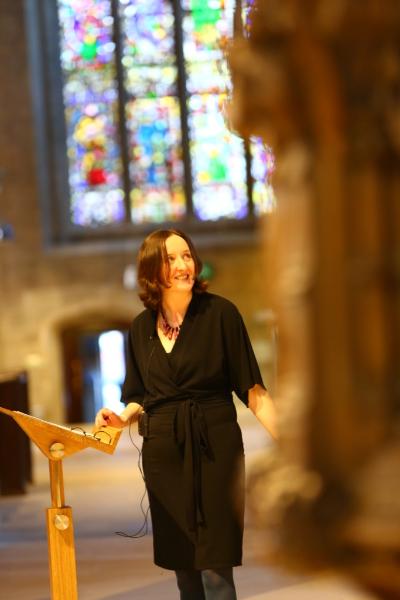 Prior to her career in academia, Catherine worked for the BBC Political Unit, including as a researcher and TV producer.

She has held fellowships at the Institute of Historical Research, the British School at Rome and the European University Institute, and has lectured at Durham University and the University of Sheffield.

Dr Fletcher is to lead the new MA in History and Heritage, which is to be launched by the College of Arts and Humanities.

The College has built a strong reputation in the heritage field, with initiatives such as the Heritage Skills Programme, which offers placements to students with organisations in the field, and regeneration projects such as the Hafod copperworks in Swansea.

"I'm delighted to be joining Swansea University and look forward to bringing my experience with the media and cultural industries to our history and heritage programmes as well as discovering more about the many exciting heritage sites and projects in the region."

Professor John Spurr, head of the College of Arts and Humanities (COAH), said:

"COAH is delighted that Catherine will be joining us this autumn to lead our new MA scheme in heritage and history.  Our track record of work and training in the heritage sector will now take another leap forward."