Priceless cultural treasures and historic sites in Syria are suffering from damage and looting in the war, and local and international action is needed to try and stop it, according to a Swansea University expert.

Syria has historically been a melting pot of cultures, including Greeks, Persians, Romans, Christians, Muslims and Jews. It is home to the sites of some of the great cities of the ancient world. Now, many of these sites are at risk because of the conflict, warns Dr Nigel Pollard, associate professor in history and classics in Swansea University's College of Arts and Humanities.

This has been underscored dramatically in recent days, with the widely-publicised destruction by IS in Iraq of Assyrian antiquities in the museum at Mosul and on the Assyrian site of Nimrud itself, and reports of destruction at the UNESCO World Heritage Site of Hatra. Hatra was the capital of an independent desert kingdom that resisted sieges by Roman armies before eventually allying with them.

Picture:  a fresco from the third-century synagogue in the ancient city of Dura Europos, a thriving cosmopolitan city on the frontiers of the Greek, Roman and Persian empires, in present-day Syria and at risk from damage and looting

Dr Pollard is an expert in ancient Syria, and has visited and conducted fieldwork at many of its historic sites. He is also an expert in protecting cultural sites in conflict zones. He is a member of the UK National Committee of the Blue Shield organisation, which co-ordinates international work in this area. He has also worked on the real-life “Monuments Men”, the unit set up by the Allies in World War Two to protect and recover cultural and artistic treasures, which was the subject of the recent film directed by – and starring - George Clooney.

Getting accurate reports from Syria can be difficult, but sources such as satellite photographs and postings on social media can give experts an idea of what’s happening. Past fighting has caused:

•    War damage to UNESCO World Heritage sites, including the Great Mosque in Aleppo and the Crusaders’ castle at Crac des Chevaliers

•    Deliberate damage, motivated by ideology, by IS forces to sites such as Yezidi shrines and a 14th century mosque

•    Looting of cultural treasures, including priceless tablets inscribed with some of the world’s earliest written languages; Greek and Roman statues; and sculptures from Palmyra

Picture: Syrian army soldiers with a sculpture in the ancient city of Palmyra

The ancient city of Dura-Europos lay on the frontiers of Greek, Persian and Roman empires, with thriving Jewish and Christian communities.  Satellite photographs show a dramatic increase in digging recently.

The main damage was caused by digging down into previously unexcavated habitation levels. Its location, close to the Iraqi border in Deir-es-Zor province (a key area of IS control), also makes it potentially vulnerable to deliberate, ideologically motivated, damage like that inflicted recently in Iraq. The same is true for the nearby Bronze Age site of Mari, which has also been looted.

Dr Nigel Pollard, from the department of history and classics at Swansea University, said:

“In any conflict, reducing the harm to people must always be the priority. But it’s also important to shed light on the damage that war causes to cultural and historic sites.

What’s happening in Iraq and Syria is comparable to Stonehenge and Hadrian’s Wall being looted and damaged.

Syria has historically been a melting pot of cultures, with a rich legacy of monuments and antiquities. These have suffered throughout the Syrian conflict, with damage to spectacular and important sites such as Palmyra, Apamea and the so-called Dead Cities of northern Syria. This is caused both by combat itself and by looting, often motivated by economic hardship, carried out in the security vacuum that has existed in many parts of the country.

Damage has been caused by all sides in the conflict. However, even before the latest outrages in Iraq there was evidence that IS had been deliberately destroying Yazidi and Muslim sites for ideological reasons. IS also profits by taxation from illegal excavation of antiquities from sites in territory it controls, and there is evidence it encourages, sub-contracts or even directs such looting.” 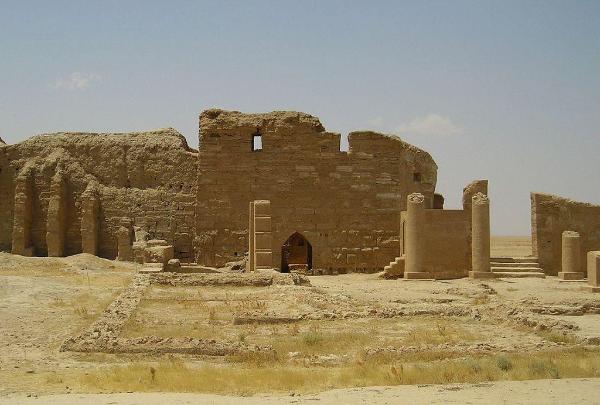 Picture: The Temple of Bel, part of the ancient city of Dura Europos, which is believed to have suffered extensive damage from looting.

Dr Pollard said that Blue Shield – the equivalent of the Red Cross but for cultural sites - has co-ordinated lists of monuments, museums and other cultural sites and urged combatants to respect them. However, he said that more action was needed at international and local level:

“While it’s probably impossible to prevent ideologically motivated destruction on the scale seen at Nimrud and in the Mosul Museum, stronger international action to clamp down on illegally-traded artefacts from the region (included in UN Security Council Resolution 2199, passed on 12th February) at least makes illegal traffic in such objects more difficult.

We also need to support locals in protecting their own heritage as they’re often the best at it. There are charities which train and support Syrian archaeologists to protect sites and record damage. They also educate armed forces on their obligations under international law. Outside of wartime, the emphasis should be on educating local people so they feel they have a stake in protecting their heritage, and making it an economic asset by encouraging visitors.”