Swansea University Audiology student Ffion Kelly-Rees has been named as the winner of this year’s British Academy of Audiology (BAA) Lisa Bayliss Award. 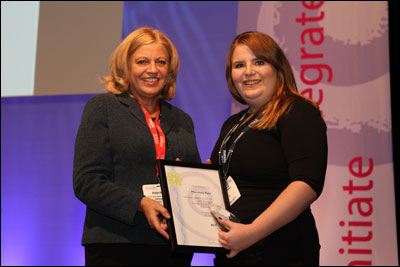 The award seeks to recognise the audiology student who performs the best during their BSc placement.

Year three College of Human and Health Sciences student Ffion, aged 20, from Dublin, received her award along with other winners at this year’s British Academy of Audiology Awards (part of the 12th Annual Conference), which were held in Harrogate.

Lisa Bayliss was a 20-year-old student Audiologist working at the Royal Liverpool Hospital, but in 1992, her life was tragically taken on her way home from work.

Lisa was described as kind, caring and someone who worked well with everyone she met. And when it was suggested that an award be named in her honour, it came as no surprise that the award would be given to someone who showed the qualities Lisa possessed in abundance.

Ffion said: “I was very honoured to be nominated and I was shocked but thrilled when I found out I won. When you love what you do, it comes naturally to do the best you can at all times and I love Audiology!

“I just do a normal day of work when I am on placement, but my mentors always tell me that I go above and beyond. I just go in each day eager and ready to learn and participate in whatever tasks need to be carried out.

“I love being a student at Swansea! I choose Audiology because it is relatively an unknown speciality and the job really appealed to me.  The lecturers here are so approachable any problems with coursework; placement or lectures have always been answered so quickly.  Without the supportive staff here in the College of Human and Health Sciences the course would not be as enjoyable as it is.

“I start a six month placement in January and the course finishes in June. After that I would like to secure a position in the NHS specialising in paediatrics. One thing that I have learnt at my time in Swansea is that the world of Audiology is your oyster; there are so many opportunities.

“I enjoyed the experience of attending my first BAA conference I got the opportunity to attend some interesting lectures on a variety of topics from cochlear implants to aural rehabilitation. I learned a lot.”

He said: “While on placement at Cwm Taff Health Board, Ffion received a glowing reference from Jon Arthur, the Head of Service, about her work with patients. She helped the department with a patient satisfaction survey and I know they were very grateful for her input.

“In addition, while she was on holiday from her studies, she organised an additional voluntary placement while at home in Dublin. The head of service again wrote a letter commending Ffion's clinical skills.

“Clearly Ffion deserves recognition and I wholeheartedly congratulate her on her success.”

Image: Ffion Kelly-Rees (right) receives her award from the BAA.