2014 IPC Athletics European Championships: 200 days to go marked with the launch of the ‘Champions’ programme

Today (30th January 2014) marks just 200 days to go until the 2014 IPC Athletics European Championships - Swansea 2014 - the biggest para-athletics event ever to be held in Wales, begins. To mark this occasion the ‘Champions’ volunteering programme was launched at an event at Swansea University Sports Village. 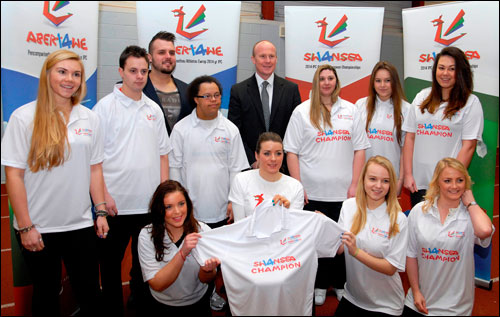 The event saw Paralympians and Swansea 2014 ambassadors, Aled Sion Davies MBE and Josie Pearson MBE join the Chair of the organising committee, Mr Paul Thorburn, in welcoming the first selection of volunteers to sign up to the programme.

Championship organisers are looking to recruit up to 1000 volunteers from across Europe to help deliver the event, which is the first of its kind to be held in the UK.  Applications opened today online at www.swansea2014.com and prospective ‘Champions’ have until March 30th to apply.

This ‘once in a lifetime’ opportunity will see the ‘Champions’ deployed in a wide variety of roles from general  volunteers assisting  at venues to specialist roles including drivers, translators and media operatives.

Paul Thorburn Chair of the Swansea 2014 Organising Committee said; “Today is a hugely important day for the event, the city and Wales.  The Champions that we will recruit over the next few months are one of the most important parts of Swansea 2014, helping deliver the greatest European Para-athletics championships to date and making sure that thousands of athletes, officials and spectators have a truly unforgettable experience.  Whilst we welcome applications from across the globe, we want the people of Swansea to be a part of this event and hope that a large proportion of the Champions will come from local communities.  ”

Paralympian Aled-Sion Davies MBE and Swansea 2014 Ambassador said; “I'm absolutely ecstatic about having the IPC Athletics European Championships on home soil this year in Swansea and as an ambassador for the event I know we can deliver a high quality competition, writing history in the making. The event can only be this successful with volunteers, they bring energy and spirit to the table which is indispensable. I urge everyone to consider volunteering as they could be a part of something very special.

Paralympic Head Coach, Paula Dunn said; “Today marks another milestone on the road to the IPC European Championships. There was a great volunteer base in Lyon that helped a create a hugely successful IPC World Championships last year and I’m sure Swansea 2014 will be no different. It’s not just the athletes that make a championships, but it’s also the people in the background right from volunteers to coaches that create that world-class environment.

“London 2012 helped create a legacy for Paralympic sport and I’m confident that Swansea along with the other para-athletic events staged around the world can help to continue finding the next crop of talent.”

Applicants need to be 18 or older to apply, must be available for ten days around the Championships and will need their own transport and accommodation.  Full training will be given to all successful applicants.  Younger volunteers will be engaged through existing programmes including City and County of Swansea’s Young Ambassadors.

Swansea 2014 will take place at the Swansea University Sports Village between 18th – 23rd August 2014 and will see around 600 of Europe’s  best athletes compete for honours as they make their way to the Rio 2016 Paralympics Games.

The event is being delivered by Swansea University in partnership with Swansea Council, Disability Sport Wales, British Athletics, Welsh Athletics and the Welsh Government.