Swansea University established Technocamps has been accredited to deliver the Ofqual-recognised ASFI Certificate in Computing for Teachers.

After a detailed scrutiny and accreditation process, Technocamps’s portfolio of Technoteach teacher training modules has been formally endorsed by ASFI – Accredited Skills For Industry. 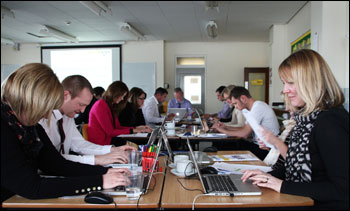 Technocamps is a schools outreach programme established in 2003 by the Computer Science Department in Swansea University. It now has hubs in six further University Computer Science Departments across Wales: at Aberystwyth, Bangor, Glyndwr, Cardiff and Cardiff Metropolitan Universities and at the University of South Wales in Glamorgan. Over the past 16 months these hubs have hosted 18 Technoteach CPD modules – each typically 20 hours long delivered one evening per week over six weeks – upskilling a total of 256 teachers covering all Key Stages of education from both primary and secondary schools.

After more than a decade of pushing for change in computing education in Welsh schools – a change which last year took place in English schools – Technocamps is now ideally placed to help bring about real change in Wales. Professor Graham Donaldson’s Report “Successful Futures” on Curriculum and Assessment in Wales was published at the end of February and calls for computing and digital literacy to be considered as important as literacy and numeracy; in light of this, one of its key recommendations recognises a need for immediate action to build teacher confidence and capacity in computer science.

In mid-March Professor John Furlong’s Report into initial teacher training will be published, which will likely reflect on the state of ICT/Computing teachers in Wales, given that the General Teaching Council of Wales reports that most have no formal qualification in ICT let alone Computing. Finally, at the end of March the Government’s New Deal for the Education Workforce is expected to deliver its report, which will look to develop and deliver new professional standards for teachers. Welsh Government has already started to look to Technocamps to consider ways to address the skills shortage amongst ICT teachers in the face of curriculum change, including becoming involved in their recently-launched Schools Challenge programme.

Technocamps was started as a programme to engage school kids as a means to change perceptions about computing amongst schools and teachers, who themselves were universally reluctant to move out of their ICT comfort zone of teaching word and powerpoint. After providing fun and interactive workshops for tens of thousands of school children over the past decade, financed through a variety of private and public funding streams, the

Technocamps effect is finally being felt and acted upon by schools and government.

Picture caption: Teachers from across Wales being upskilled in computer programming as part of Swansea University’s Technoteach programme.