Swansea Stadium Management Company has confirmed the new agreement which will run until the end of the 2017-18 campaign.

The University joins other established stand sponsors in the stadium in Visit Wales, E-Teach and LG Electronics, and the agreement now means that all four stands at the stadium have title sponsors for the first time.

Professor Richard B. Davies, vice-chancellor of Swansea University, said: “The University has an excellent relationship with the two top-class clubs in the city – the Ospreys and the Swans – and this new move, with our branding at the splendid Liberty Stadium, will consolidate the partnership.

“We pride ourselves on our sporting successes at the University, and the excellent facilities we can offer our students.

“As a university, we are moving from strength to strength, and it is important for us to work with such strong sporting sides to demonstrate the new vibrancy of the modern Swansea." 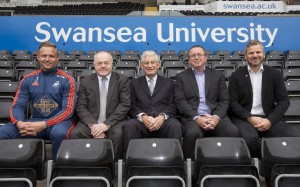 “The Liberty Stadium now offers global brand visibility and is a name that is familiar with sports fans throughout the world. We have very successful partnerships with our existing stand sponsors and I am confident that this success can be replicated with this new relationship."

Councillor Christine Richards, chair of the company’s board of directors, said: “This is the first time that the West Stand of the Stadium has had a title sponsor, and I cannot think of a better partner. Our two resident clubs already have long established relationships with the university and are equally delighted with this development.”