St. Modwen, the UK’s leading regeneration specialist and lead developer of the new £450m Bay Campus, has signed a Development Agreement with Swansea University to deliver an additional 538 en-suite student rooms at the new Campus site. 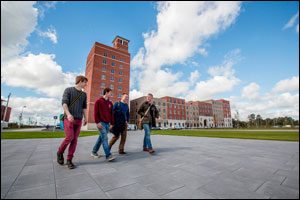 ‌Works to this next phase of student accommodation will start in January 2016 and will complete in time for occupation in September 2017.  Collectively, this will bring the total number of student residences, provided in three distinct phases by St. Modwen for the Bay Campus, to 2,000 by autumn 2017.

The first 917 student rooms have already been delivered on budget and in time to welcome the first intake at the Bay Campus this September 2015.  The next phase of 545 residences are nearing completion by contractor, Galliford Try, for student occupation in early 2016 and will subsequently be joined by this additional third phase of 538 rooms.

‘St. Modwen Student Living’, the newly established division within St. Modwen, is already responsible for the ongoing management of the first phase of student accommodation and associated facilities at the Bay Campus and will take on the management of the next two phases as they come on stream throughout 2016 and 2017. The St. Modwen Student Living team is also responsible for providing pastoral care to students in residence.

St. Modwen continues to work in partnership with Swansea University to provide interim accommodation for additional Bay Campus students at the University’s existing Hendrefoilan Student Village with a regular bus service operating between the two sites.

Rupert Joseland, South Wales’ regional director for St. Modwen, said: “The Bay Campus development is a major highlight of St. Modwen’s ongoing and transformational 2,500 acre regeneration programme across South Wales. The first million sq ft of space including 917 student rooms have now been successfully completed and this latest Agreement with the University is the next step in the long term-vision to become a world-class educational establishment that will benefit students, staff and the local community for generations to come.”

Under the existing outline planning consent for the Bay Campus, capacity is allowed to deliver a total of up to 4,000 new student residences across the lifetime of this 10-year project build.  St. Modwen will continue to work closely in partnership with Swansea University to realise this end goal.